A birthday and a rescue 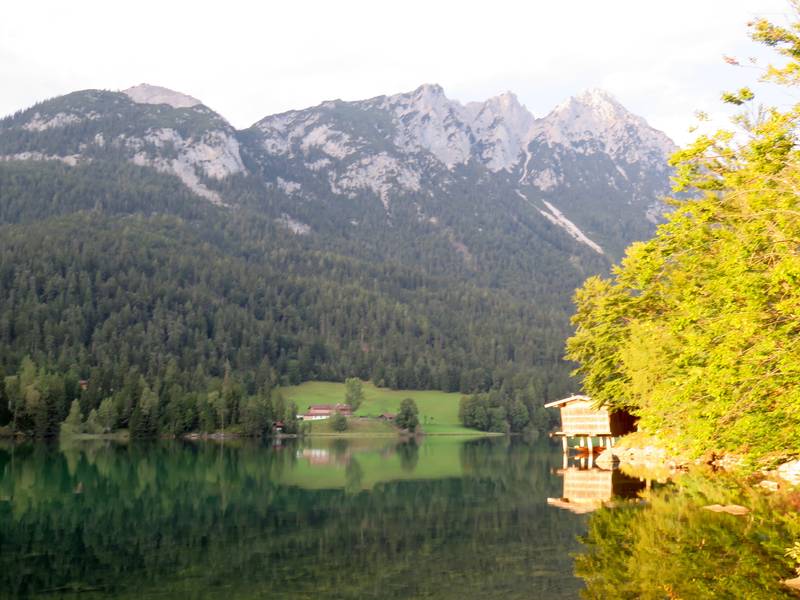 Birthdays are a big deal in our family. I remember my daughter wanting a fairy forest party for her fourth birthday. We spent weeks looking on Craigslist for artificial Christmas trees and ended up with a fake forest in our tiny living room in Maryland. We planned spy parties, with notes spread around town in invisible ink and secret codes. I remember spending hours hooking red yarn around our playroom to make it look like lasers for the kids to crawl through — of course, the Mission Impossible theme song playing in the background. We turned our walkway into a yellow brick road for a Wizard of Oz party and had treasure hunts leading everywhere, from teepees to treehouses to apple orchards. 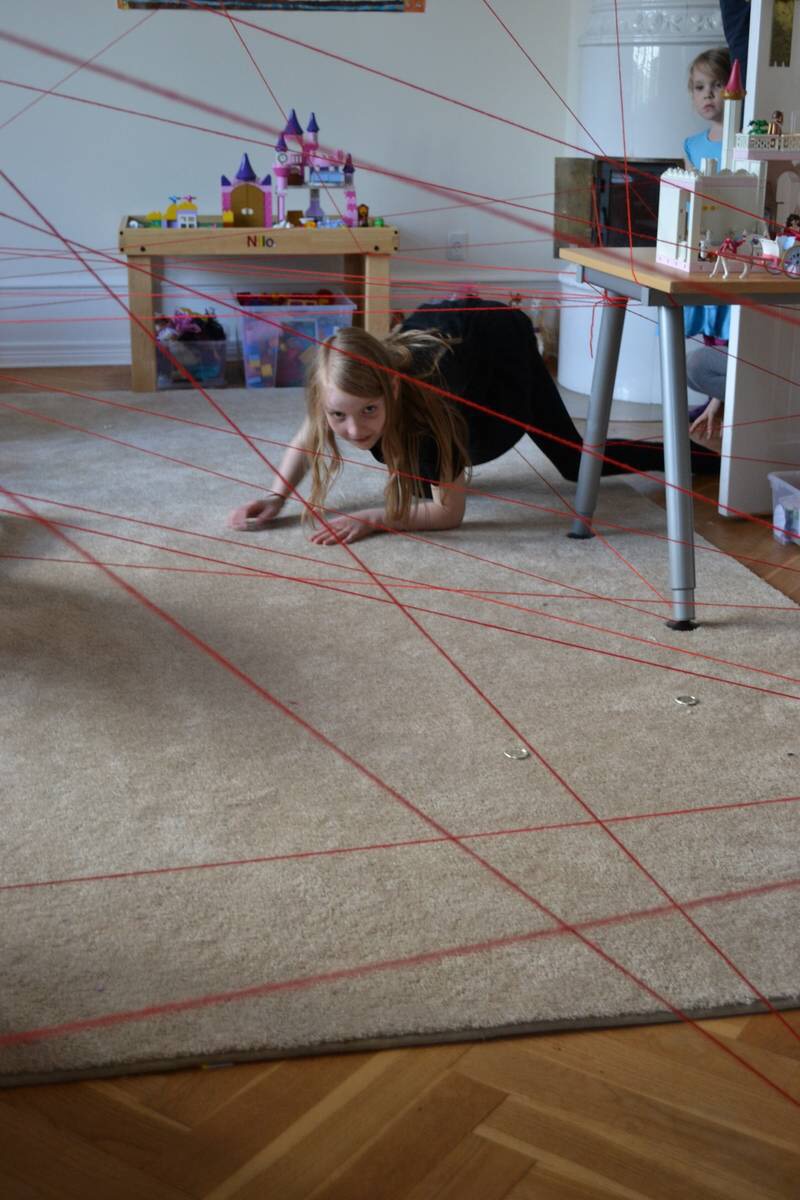 It wasn’t that we always spent a lot of money on the parties, but we did spend a lot of time and energy on them. We love doing it. The kids look forward to their special day months in advance.

But as we travel this year, we have to adapt — a lot.  Our every day looks different, as do our celebrations. We’ve all agreed that the theme of this year’s birthdays — for each of us — is simple. No decorations except maybe a hand made sign, a few handmade cards, and any gifts are experiences, not material things.

And the kids are okay with that – in fact they’re excited about it. They get to help plan what we do on their day, where we visit, even what country we should be in.

My birthday a few days ago was the first on the trip. Sticking with the simple theme, I decided I wanted to have breakfast together and then take a nice hike around a nearby lake that we hadn’t yet visited.  We were in Tirol — a gorgeous part of Austria. What better place to celebrate. 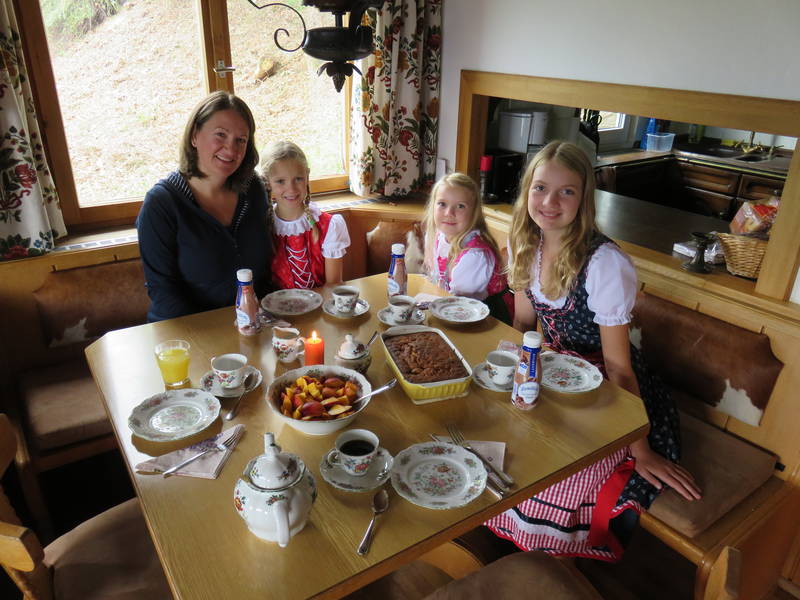 The five of us plus dog got ready for a nice hike around a lake that is known for being incredibly beautiful and very clean — drinking water quality so they say. But you’re not allowed to swim in it. I’m guessing that’s why it’s so clean.

Our dog has spent most of her nearly three years off leash. We lived on five acres near Portland, did a lot of hiking, and went often to the Oregon coast (dog heaven!). So having her off leash around this beautiful lake where no cars could drive was easy. Dogs in Austria and Germany are incredibly well behaved so we were happy our dog had been measuring up. She comes with us in restaurants and lies under our table unnoticed, comes when she’s called and sits outside grocery stores patiently waiting for us.

Then came that duck. Our dog has never really cared too much for American ducks — totally ignored them. But there’s something about these Austrian ducks that make her a bit crazy. Suddenly our well behaved dog jumped in and took off into the nice clean lake after the duck. The duck kept letting her get close, then flew ahead a bit. Our dog was never going to catch it, but she didn’t stop trying. We tried everything to get her to come back.

We even pulled out the big guns and had our youngest fake cry. Our dog always comes to console the girls when they’re hurt, but this time nothing.  She wouldn’t even turn her head. She was all about that duck.

Thinking something was wrong (my daughter is an excellent fake cryer) an Austrian hiker came over. We explained we were trying to get our dog back.

He just smiled and watched. Then another couple walked up. They sat on the bench for a rest and some entertainment.

After about 10 minutes we started to get a bit nervous. Our dog kept getting farther and farther away from us.

“Do you think she can swim for so long?” asked the hiker.

“I think she might have lost her orientation,” said another woman.

An older man came over and sat on the rocks to watch, as the benches were all taken with spectators. “Now I know why I pay taxes – so that I can watch this show,” he said with a laugh.

Then came the shouts from the kids.

“Daddy, please go get her. She’s not going to make it!”

I could tell my husband very much did not feel like jumping into a cold lake with his clothes on, especially since there were ‘no swimming allowed’ signs everywhere. But we didn’t see another choice.

The man on the rocks was quite excited about it. “Jump in!” he started to yell. Austrians don’t seem to break many rules, but we had everyone’s full support on this one.

After another couple minutes we could barely see our dog anymore, and the duck seemed to be long gone. With more shouts from the kids and the guy on the rocks, my husband was in the water. At that point, all I could do was get out the camera. That little dot way out there – that’s our dog. 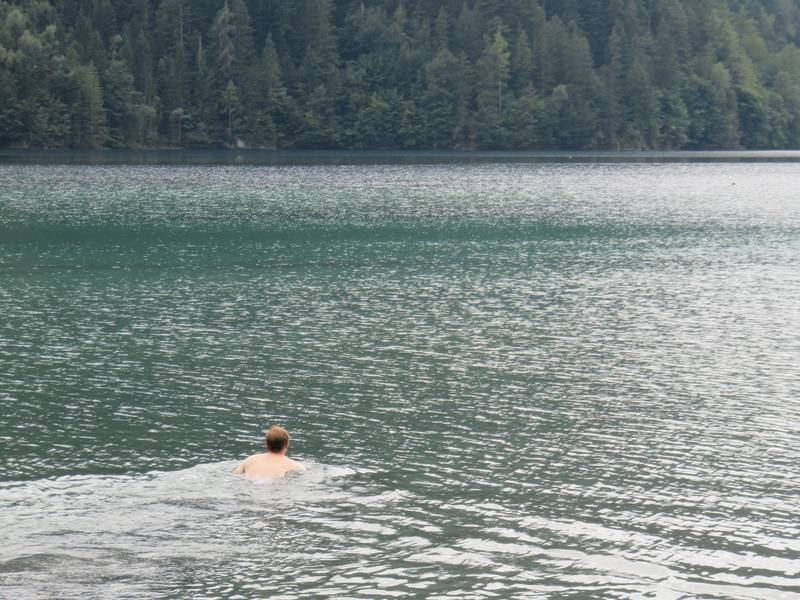 The man on the rocks cheered. He was really enjoying himself and had even gotten a snack out of his bag.

Another group of people came over. “What’s going on over here? Is that man swimming!?”

“That man is going to rescue his dog in the lake!” someone explained. Suddenly it sounded rather exciting, even to me.

Apparently the first Austrian hiker that came by had taken over as spokesman  for the situation.

My husband, who is a strong swimmer, was having trouble catching her. She kept going away from him, and she was fast! The kids were cheering him on, loudly.

At that point I felt very American. Loud and American. We’re not loud people, but out here we always seem to be the loudest ones in the restaurant, on the train, or just about anywhere.

And everyone was being nice about it, but all I could think of was what was probably going through their heads.

“Look at that crazy American — swimming in our drinking water.”

After about 20 minutes of my husband swimming after her, getting her on the leash, and swimming back, both were safe on shore. We were expecting some sort of applause, but the crowd just dispersed and we were left standing on the shore. I’m sure it’s a story that will be repeated … “So we saw this family from America…” 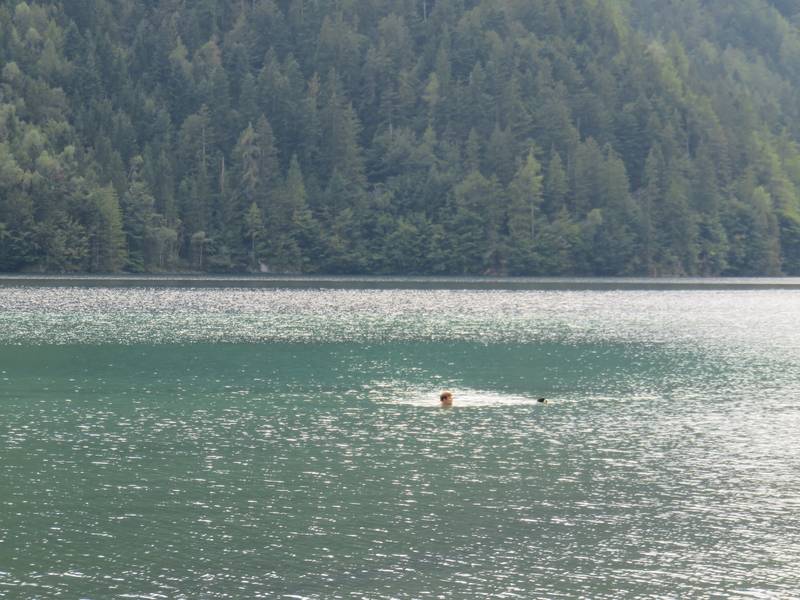 We were happy to have our pup back and she seemed absolutely thrilled with herself and ready to jump in again if at all possible. 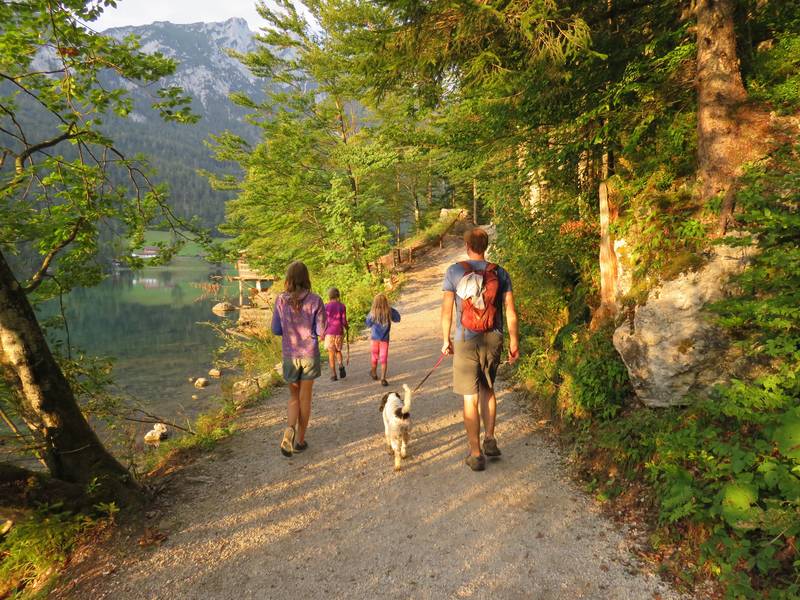 The rest of the day went smoothly, tea and cake at a restaurant on the lake, a beautiful hike, listening to some live German folk music in town that evening overlooking the mountains, a family slumber party in the living room of our mountain hut that night and falling asleep with my two youngest on each side of me.

So much for having a simple day. But it certainly was memorable. I couldn’t have asked for more. 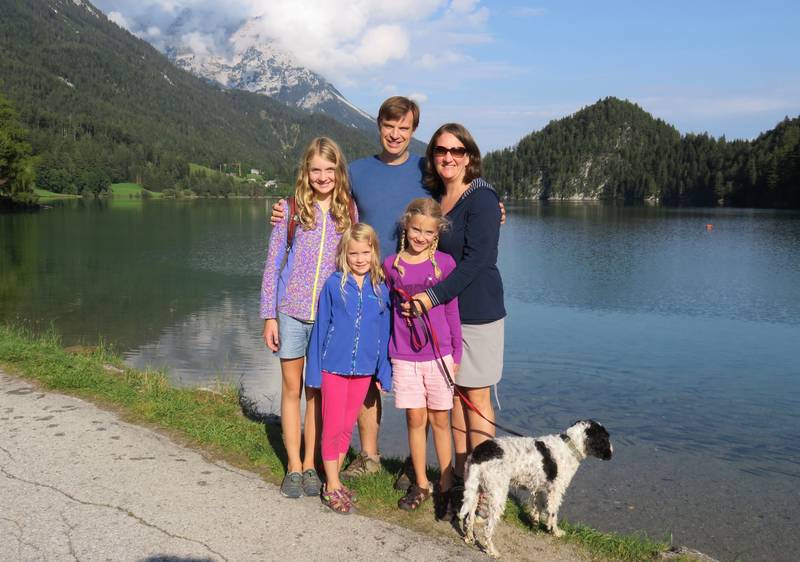