Salzburg and Lessons from Maria 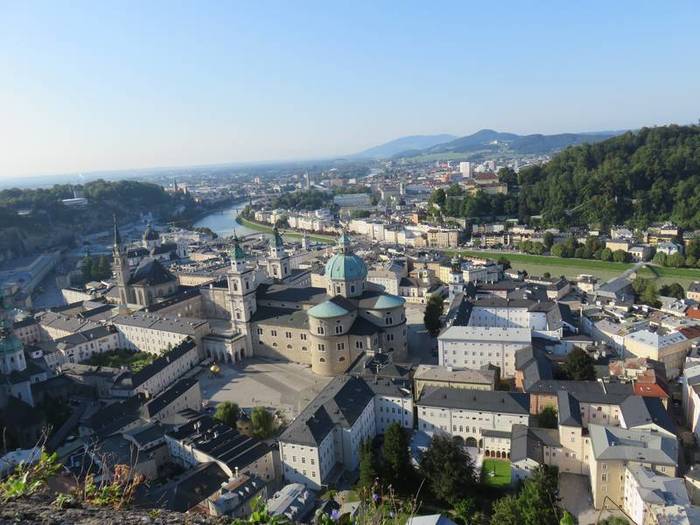 We spent the last few days in Salzburg, Austria — land of Mozart, strudel and The Sound of Music. The unbelievably beautiful mountains and lakes surrounding the city make you feel like someone photoshopped you into a postcard. 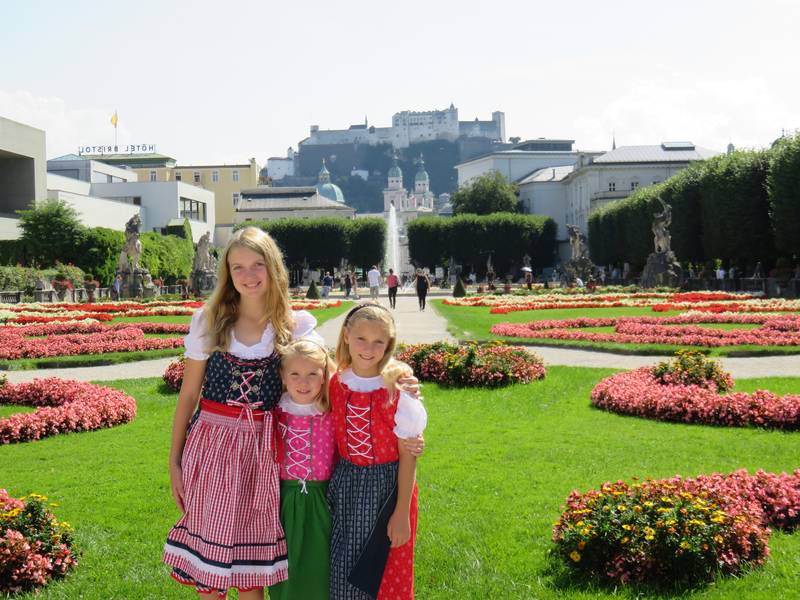 Of course, the night before we arrived in Salzburg, we watched The Sound of Music. What’s so great is that the city and many of the places where they filmed those famous scenes look exactly the same today as they did more than 50 years ago — the statues and fountains in the Mirabell Gardens haven’t aged a day, the Nonnberg Abbey remains the oldest convent in the world, and the streets and bridges are practically identical to how they looked in the movie. These places will never really change — not in our lifetime. The only thing that changes each time I go back to Salzburg and watch that movie — is me. 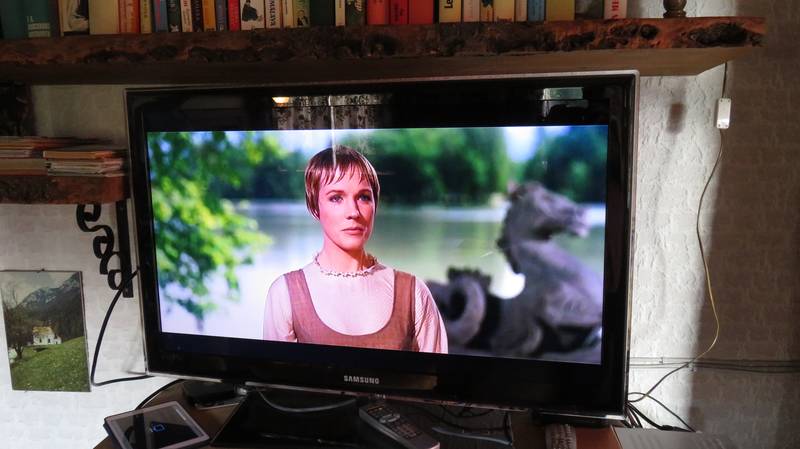 Every time I watch The Sound of Music, I come away with something new that inspires me — something that speaks to wherever I am in my life. When I was 19 and spent a semester studying in Salzburg, Maria represented freedom. When my husband and I visited there while living in Munich after we got married, the movie was about love and following your heart. Right now, my life is about change, taking chances, and spending time with my family.

So as we hike up the hill to the Hohensalzburg Fortress or sit in a cafe and enjoy a big apple strudel with vanilla sauce (I just hiked up a big hill. I deserve some strudel, right?) I remind myself of the lessons I learned from Maria this time around. 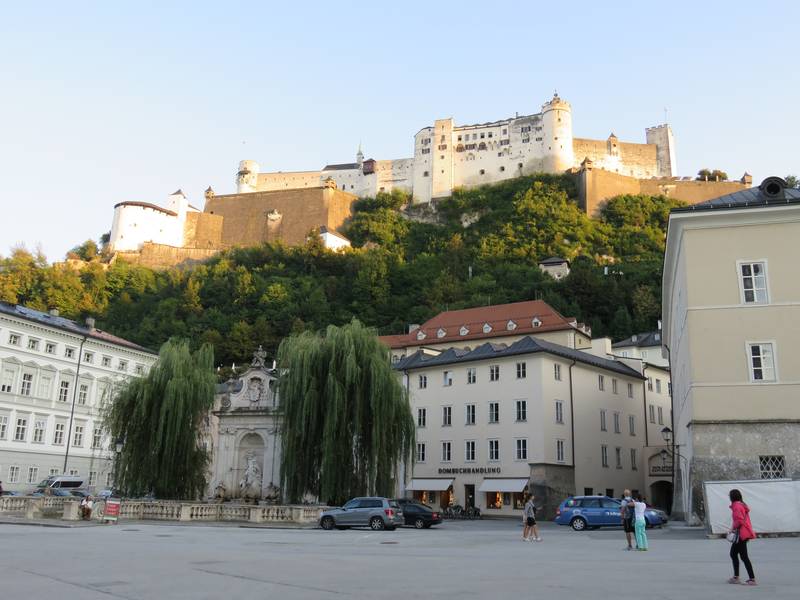 Lesson 1: Have fun with the kids

Maria and the children run through hills, sing during bike rides and fall off row boats. And that’s after a long night of making seven adorable outfits out of the old curtains. Watching them dance around the gardens and swing from trees almost makes me want to have four more kids — almost. But it certainly makes me want to have more fun with the three that I have.

So often, as parents, we watch the kids play while we talk, make to do lists or grocery lists. There will always be more to do, more cleaning, more laundry, more plans to make. It’s easy to get lost in it all. Part of this trip, for us, is about spending more quality time together. Of course we love it when the whole day can be a fun outing to a beautiful monument or a great hike around a lake, but that’s not most of the time. By quality time, I mean making the most out of the moments when we’re just together — like going down water slides with the kids instead of just watching from the bottom, eating ice cream before lunch — sometimes for lunch, or playing games during car rides or while waiting for food at the restaurant. Lately it’s been the game ‘Two Truths and a Lie,’ which is really challenging to play with family. You really can learn some interesting things about people you thought you knew everything about. Who knew my husband was often sad as a child because he thought there’d be no more problems in the world for him to fix when he grew up? No worries there. 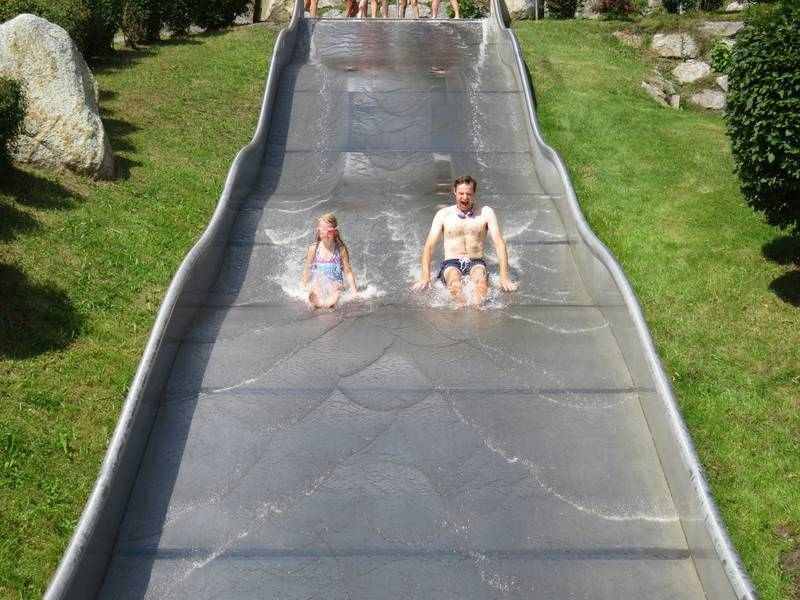 Lesson 2: “When God closes a door, somewhere he opens a window”

I love this quote. But this time, when I heard Maria say it, there were a couple things that struck me.  God’s not opening a door — he’s opening a window. That means the other path, the other choice, the other job, or house or whatever, is going to be a leap of faith. You’re going to have to jump, and you’re not allowed to look down first. That’s what a leap of faith is, right? If there’s one thing we’ve faced a lot over the past few months — with leaving a job and our home — it’s leaping without looking down.

Looking back over the years, we’ve had many doors close on us — as has everyone. Whether it was a home we had hoped to buy, a neighborhood we had hoped to rent in, a city we wanted to move to or a job we wanted – looking back, the windows that were opened often ended up being amazing gifts. Sometimes things feel as though they are all wrong, but if we remember that a window is open somewhere, we look a little harder and find that window to climb through.

This leads me to the other thing that struck me about Maria’s quote when I heard it this time — that window being opened isn’t necessarily right in front of you, it’s “somewhere.” This means that finding it might take some searching — whether soul searching or Google searching.  And there may even be more than one window open. It has taken us a while for sure to find our windows, and there are days we still wonder if we jumped out the right one. 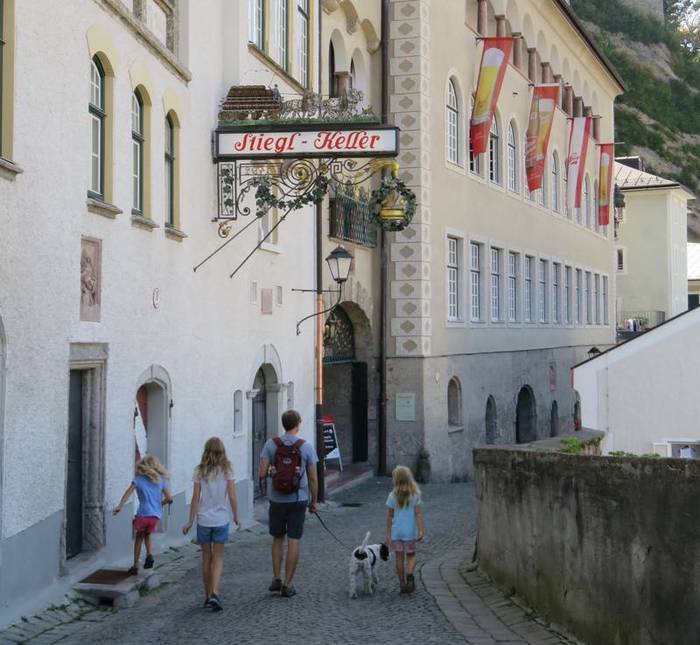 Lesson 3: Have confidence in yourself

Maria sings about having “confidence in me” while making her way from the abbey for the first time to go meet the Von Trapp family – a naval captain and his seven children — intimidating to say the least. She’s nervous for sure, but instead of going begrudgingly like many of us would, she runs, skips and dances along the path — psyching herself into it. She’s heading into the unknown with confidence and energy.

Confidence is a must when traveling. I have to constantly remind myself that we have to put ourselves out there with confidence and keep an open mind — that it’s the only way to experience new things and to grow. We think it’s the best way to get the most out of traveling, and out of life.

We are now staying at a farmhouse in Switzerland, owned by a family with two girls the same ages as my two younger ones. My girls were outside playing and the Swiss girls came out to play on the other side of the house. My girls came inside — nervous about how to talk or play with someone who doesn’t speak their language. At the same time, I could tell they very badly wanted to play with them, and they just needed a little pep talk. They went back outside, approached the girls (who probably were feeling the same way) and just started playing. They played for hours outside and had so much fun with the bit of German my girls can speak and the bit of English the other girls could speak. They gathered up their courage and had a wonderful, memorable afternoon teaching each other all sorts of games. It was so much fun hearing all the differences and similarities of outside games in America and Switzerland!

Had Maria not gone into the Von Trapp house with 100 percent confidence and faith in herself, she wouldn’t have lasted the night. Having confidence is especially important when you decide to follow a dream. Take dreams seriously. They’re a calling to be answered, not a burden to be ignored or brushed aside. Following your dreams with confidence, passion and energy — running and skipping towards them like Maria down that path — is the only way they’re ever going to come to life. 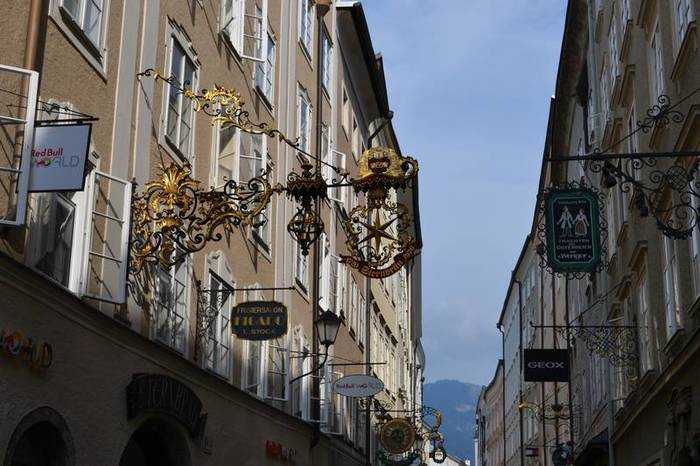 Lesson 4: Keep a sense of humor

A sense of humor was certainly something Maria had plenty of — maybe too much for a convent, but it certainly came in handy when she unexpectedly discovered a frog in her pocket. There’ve been multiple times, just on this trip, when I’ve teetered between frustration and laughter. I’ve found that pushing myself towards the latter makes everything so much more fun.

I’m learning to let go a lot on this trip. To laugh with the kids. To be silly. To scare dad whenever possible. We laugh at funny T-shirts together, we laugh about ourselves and we try and laugh even when we get lost, which is basically all the time. It makes things way more fun, as does the ice cream we always seem to find before our destination. I never realized how many ice cream shops are in Europe! 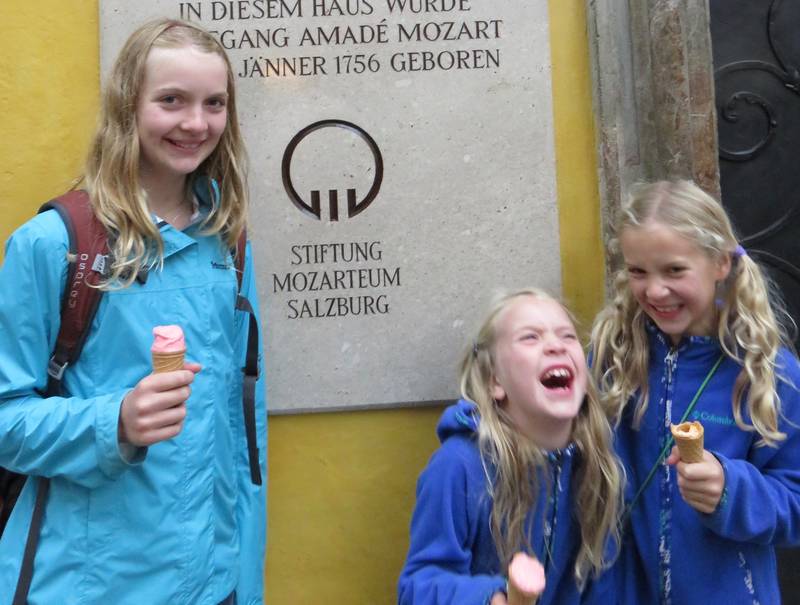 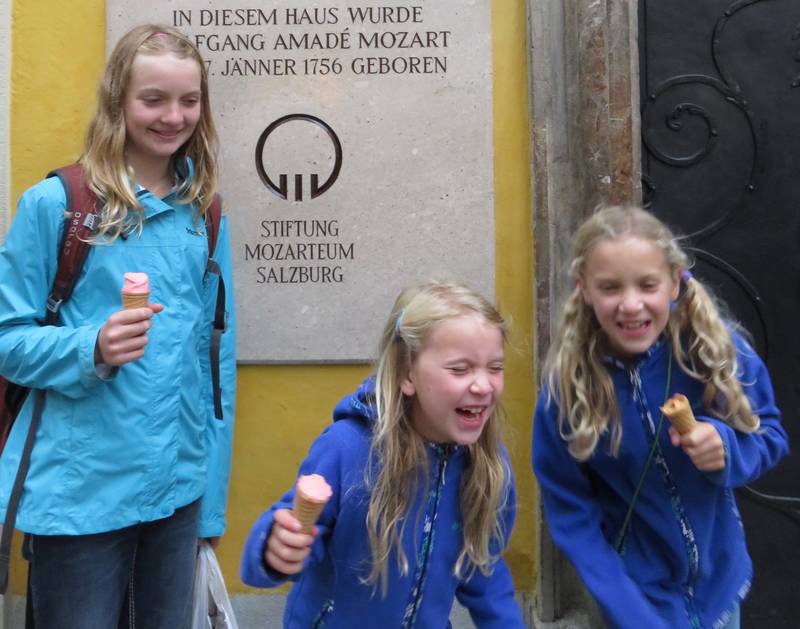 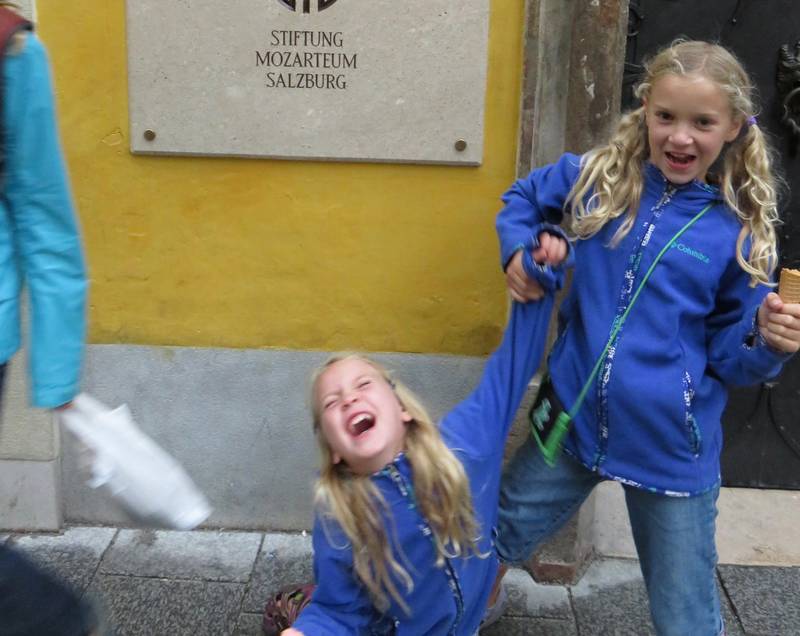 We visited the famous gazebo where 16- (going on 17) year-old Liesl sang and danced with her 17- (going on 18) year-old crush. The gazebo now sits in the gardens of Hellbrunn Palace in Salzburg, which was built by a powerful Archbishop 400 years ago. 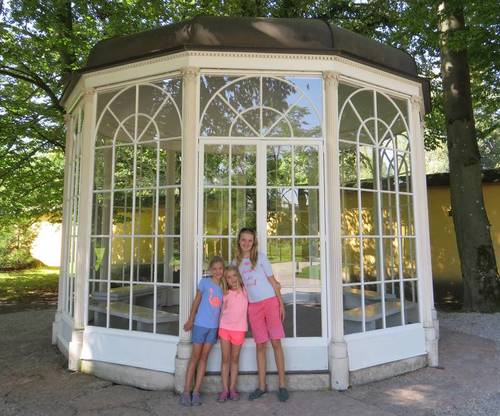 You wouldn’t think a politically powerful religious figure from the 1600s would be such a prankster, but he designed hidden fountains around the gardens to soak unsuspecting visitors. He even designed chairs that shot water straight up when someone sits down. How fun to think about this archbishop, holding back his laughter and waiting for some stuffy duke or baroness to get soaked. We certainly had fun with it! 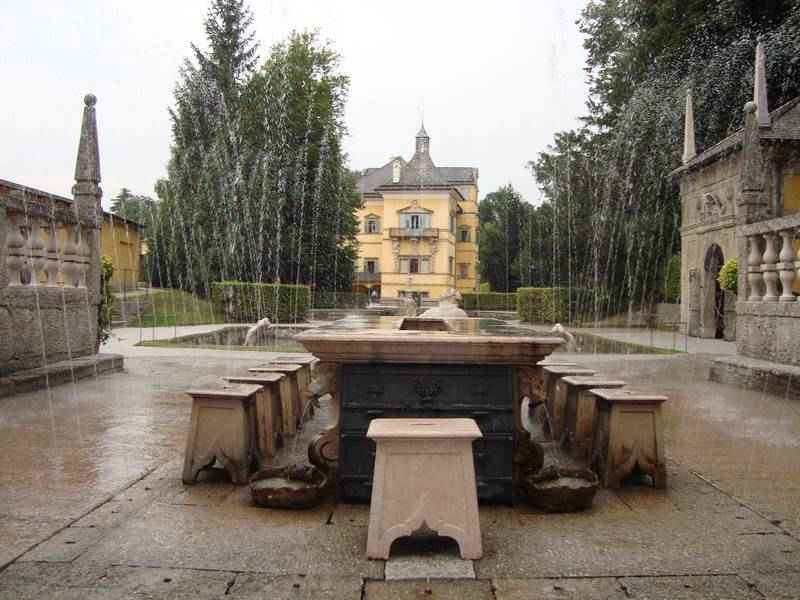 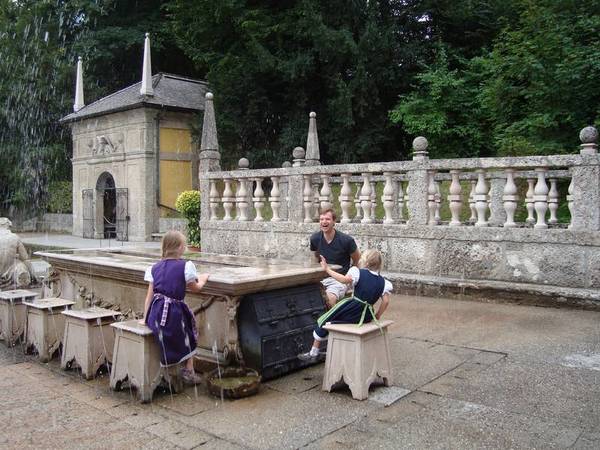 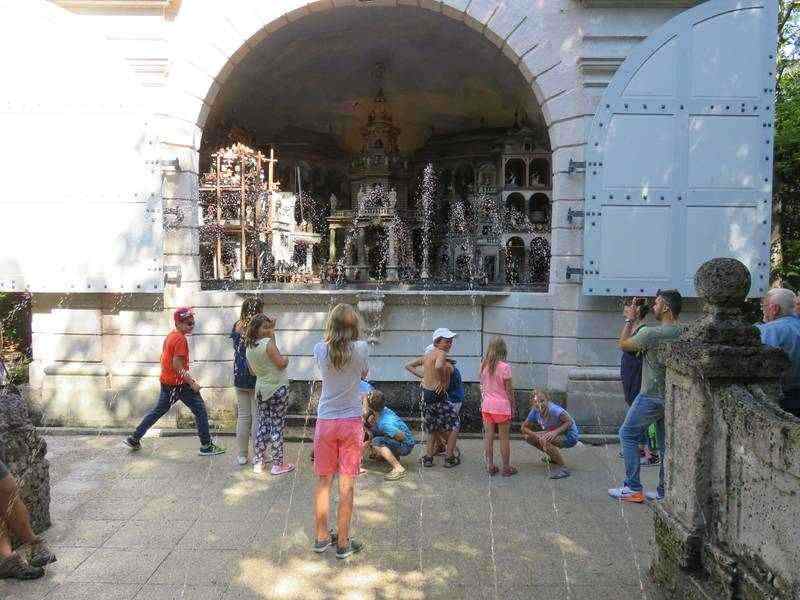 I hope to come to Salzburg again someday. If I do return, it’s comforting to know those statues will still be there, the streets will look the same and even the restaurants will be serving the same delicious strudel. No doubt each time my outlook will be slightly different and my life changed in some way. And I’ll be sure to check back with Maria to see how else she can inspire me. 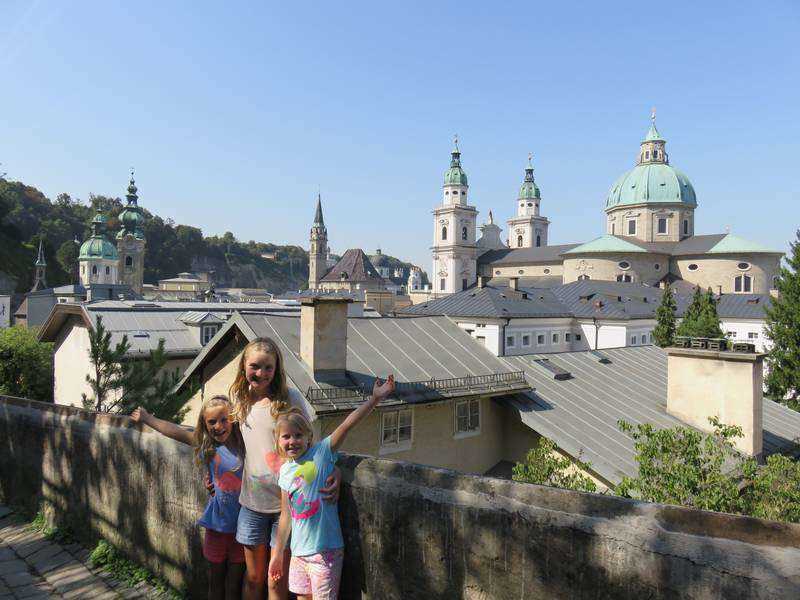 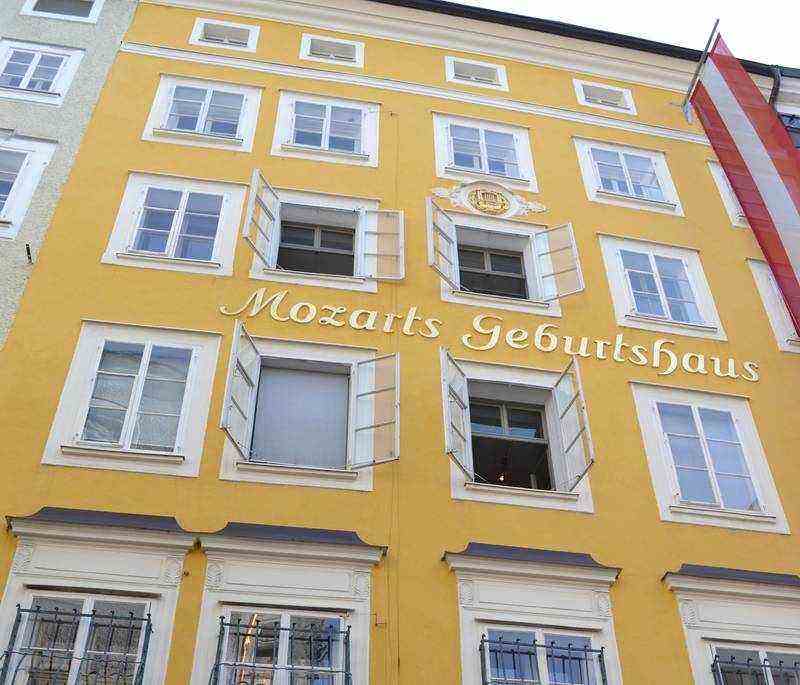 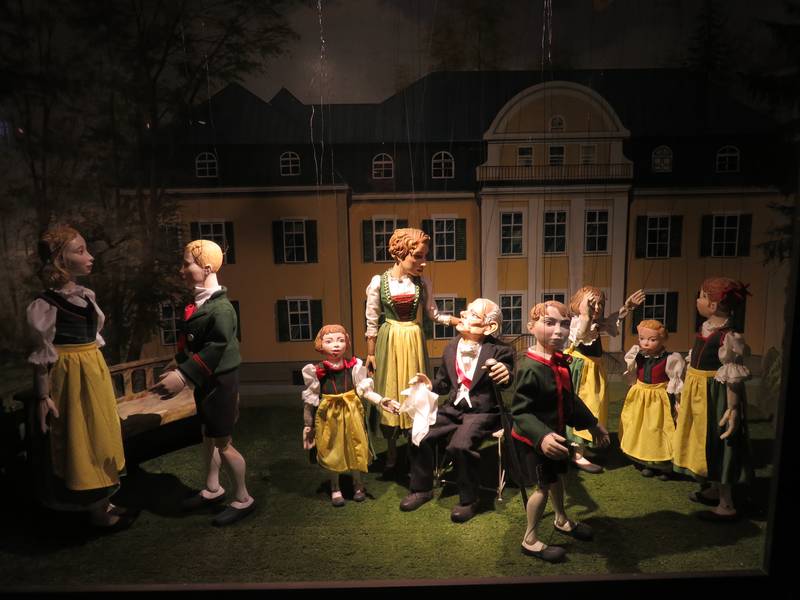 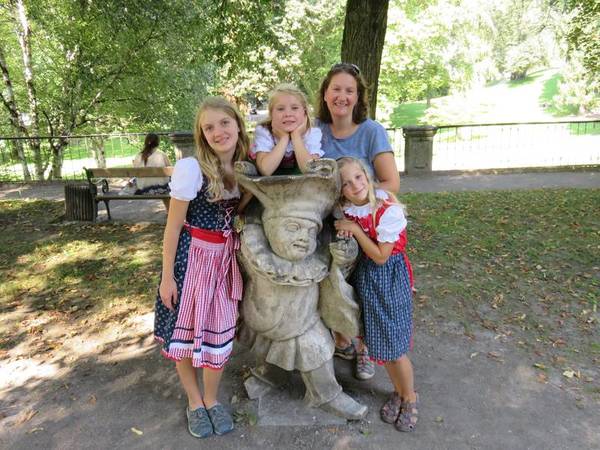