The story behind our first story 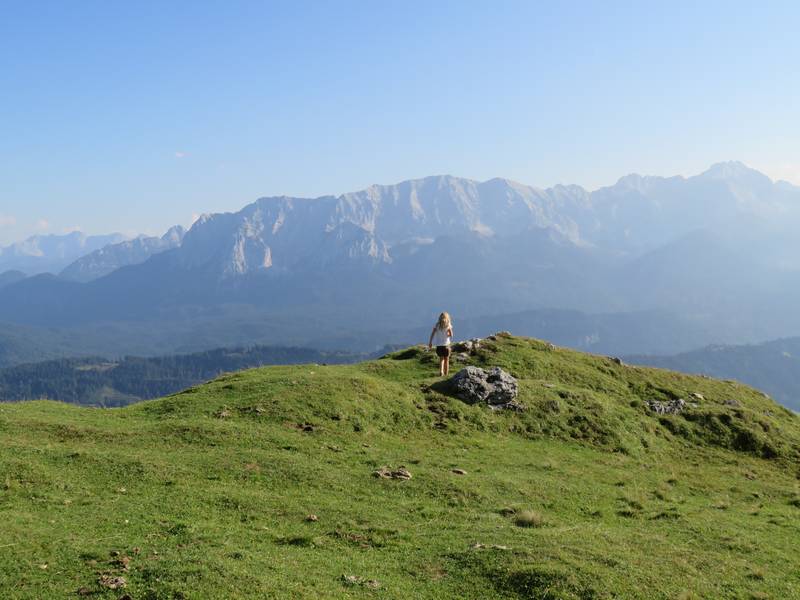 I love traveling to new places, exploring new cultures and foods, seeing new things and meeting new people – but there’s also something really special about going back to familiar places time and time again, especially as we change and grow over the years. I feel that way about the Wank (pronounced Vank) Mountain and almost get the feeling that it remembers me each time I come and has a new experience just waiting for me. I went up the mountain with my parents and brother when I was a kid. My husband and I went there several times when we first lived in Germany 17 years ago. We went back with our oldest in a baby carrier, and we went again on her eighth birthday. 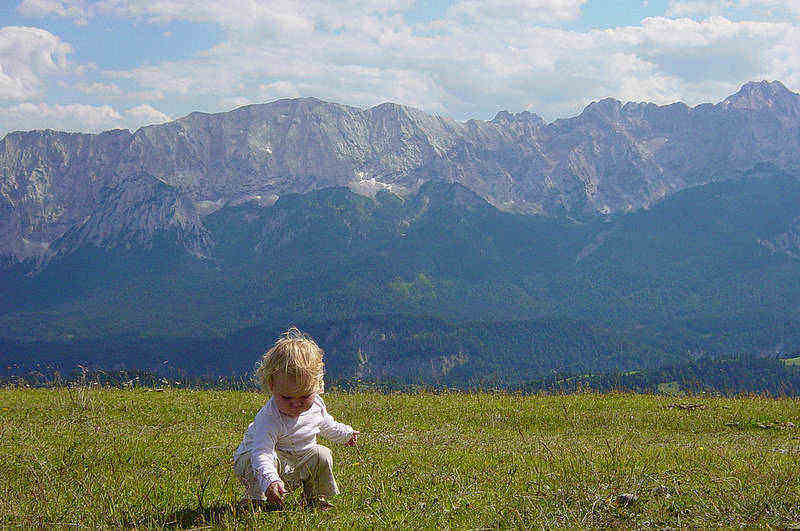 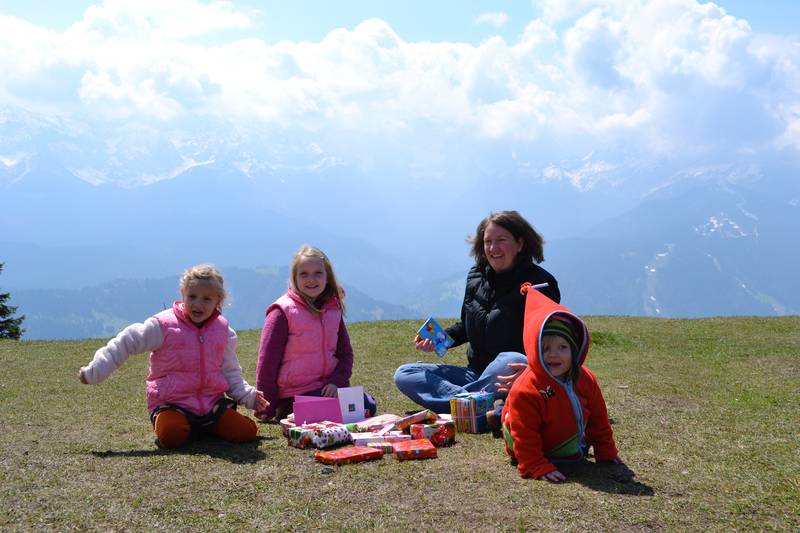 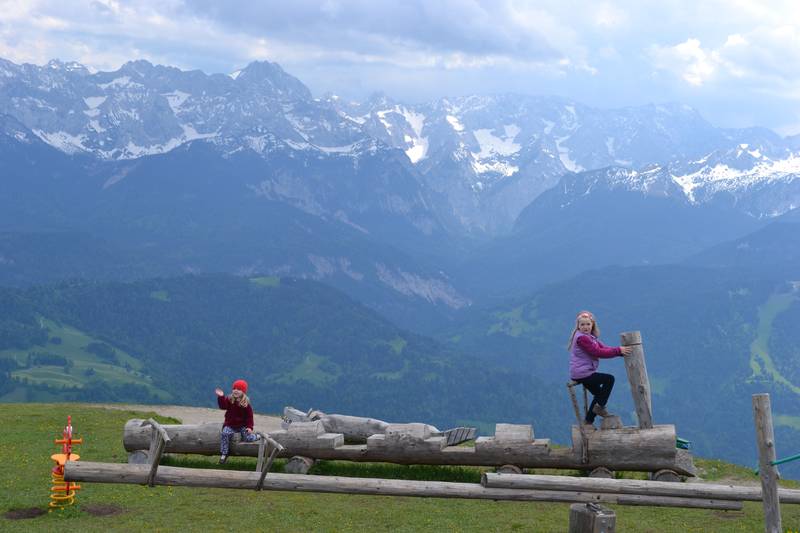 We hiked the mountain this past week, puppy included. It’s now become a special place for our whole family, and I have no doubt our girls will return with their own kids. 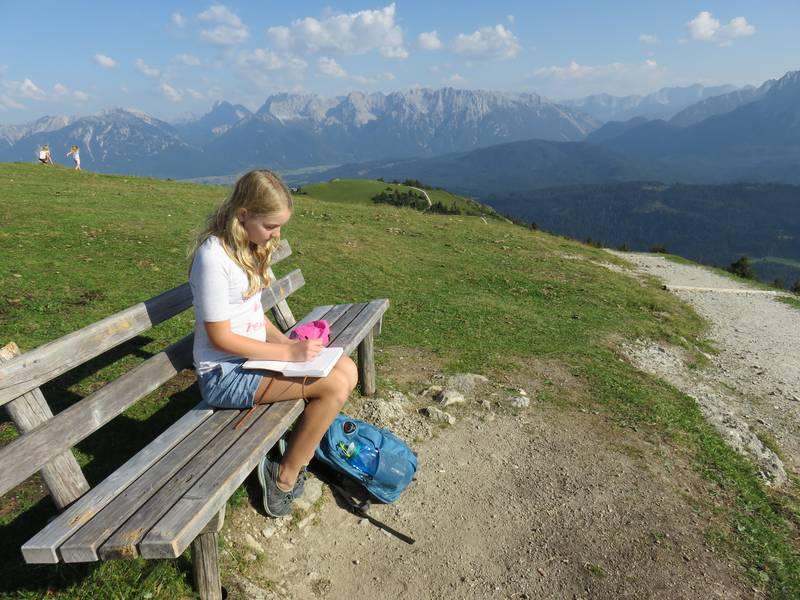 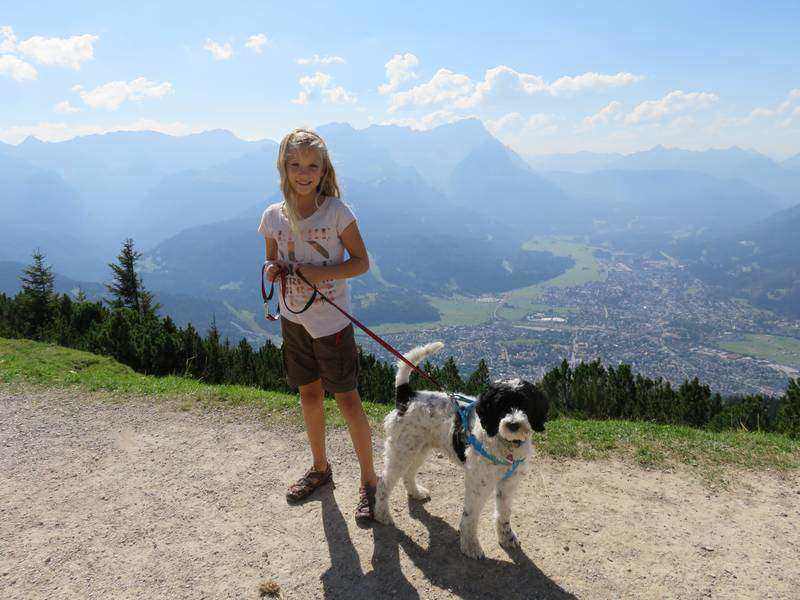 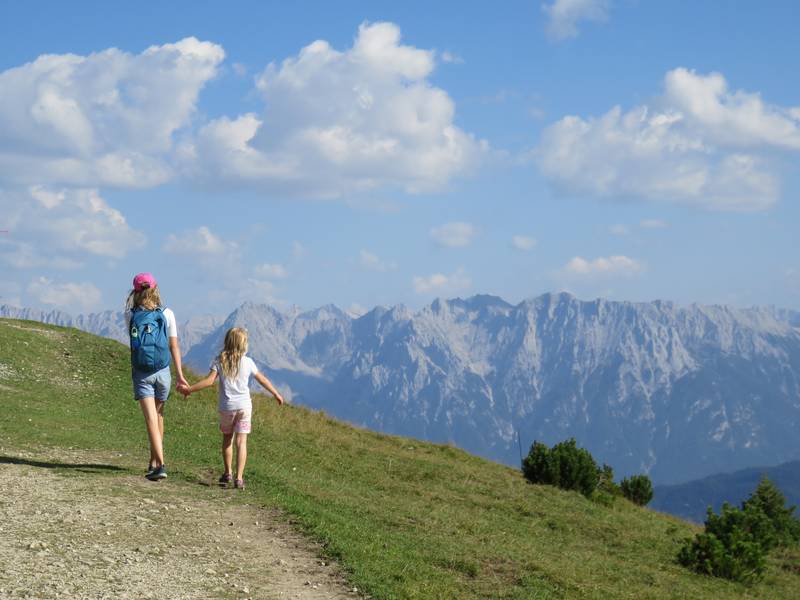 For those of you who receive our stories, you’re familiar with our first one – Maja and the Mountain Man. When we decided to start Around the World Stories, we had so much enthusiasm and excitement (we still do!). We had so many ideas and plans and absolutely couldn’t wait to begin. But begin with what? What story do we start with? What will the stories be about? Who will be the main character? Then we remembered a day we spent on the Wank Mountain when we were first married. It was Matt’s first time there. That day became the inspiration for our first story.

So as we’re still happily thinking about last week’s wonderful moments on the Wank, we thought we’d share with you today the true experience that inspired our first story — Maja and the Mountain Man.

A year after we were married, Matt and I moved to Munich. He was working as a freelance writer and I was teaching English. It was just perfect. We had a tiny studio apartment in a beautiful area of the city. We’d often hop on the train and head out to enjoy the mountains, lakes and small towns of Bavaria.

One gorgeous day, we went to Garmisch, a cute little town about an hour outside the city, nestled in a pristine Alpine valley. There we rode the bus outside of town and took the cable car up the Wank Mountain. The view was stunning. The kind of stunning you see in movies or postcards and think it just can’t be real. As we rose up the mountains, the town got smaller and smaller, and eventually Garmisch was just a cluster of red roofs with green mountains on all sides. 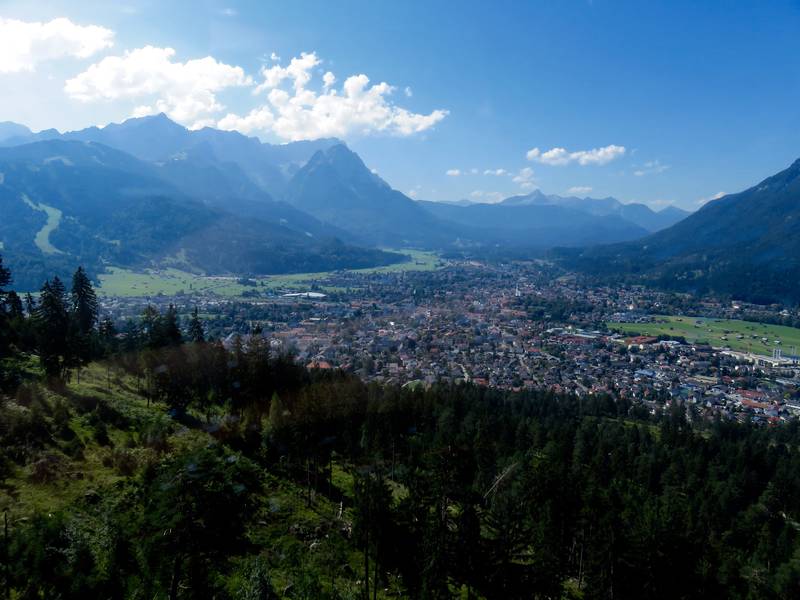 We looked down from the cable car and saw people hiking down, AND UP, the mountain. To us, being from Chicago, hiking up or down a mountain like that was quite extreme. It really is a huge mountain and we were quite comfortable in the cable car.

Once we got to the top, we both knew this would forever be one of our favorite spots on the planet. It’s just mountains as far as you can see. Behind us was Germany, in front us Austria and to the side Switzerland — truly breathtaking.

We stepped into the restaurant up at the top of the mountain and enjoyed our apple strudel with warm vanilla sauce, talking about our future, breathing in the mountain air and just taking in the view. 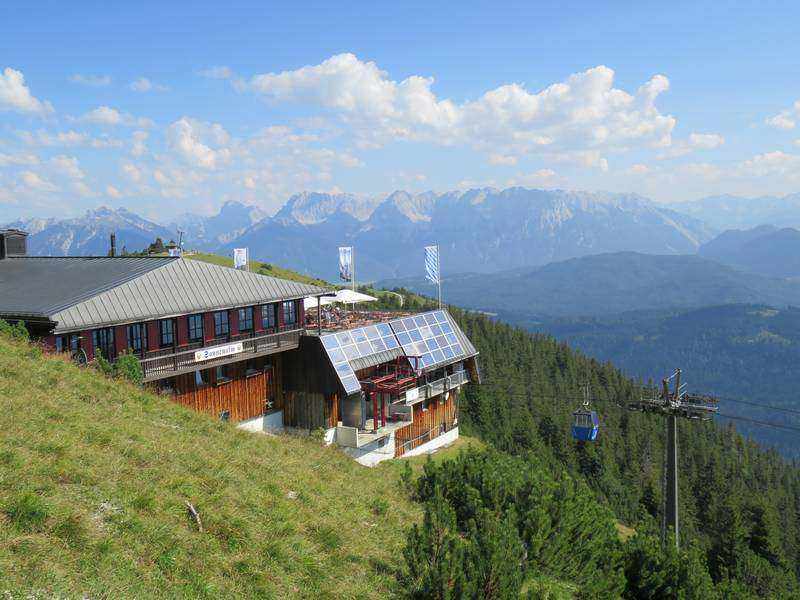 Once we were done, we walked around the mountain top, following the sounds of the cow bells to the other side of the peak. This group of lucky cows had no idea how good they had it up there. I had personally never petted a cow before and these cows were quite friendly. We spent a long time watching them and listening to the bells ringing around their necks. Eventually it started getting cooler, and we were dressed for summer weather. The temperature was a good ten degrees cooler up on the mountain, plus it was getting late. We decided to call it a wonderful day and walked back over to the cable car, looking forward to the ride down, a good schnitzel in Garmisch, and the train ride back into Munich.

We were so caught up with the cows and the mountain views that we didn’t even notice that the cable cars weren’t moving anymore. Matt couldn’t speak any German then and at first he thought I was kidding when I told him the sign said the cable cars were closed for the day. 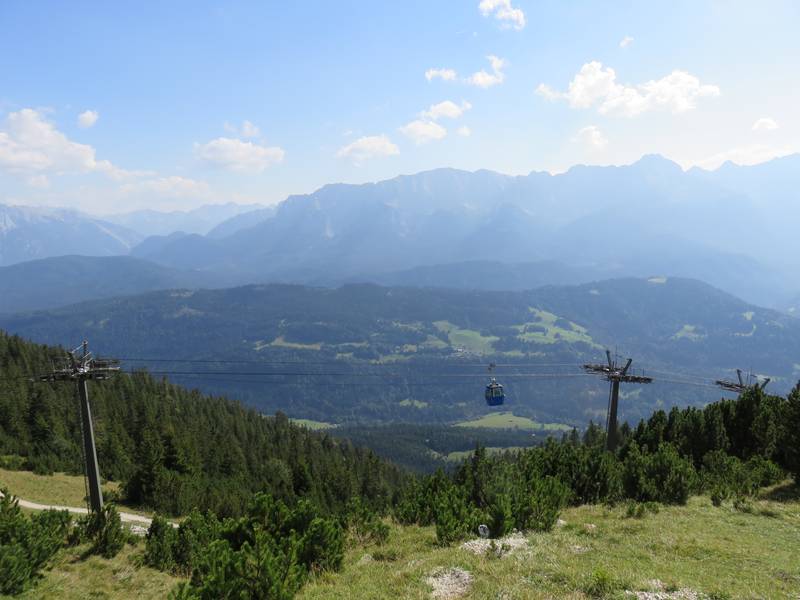 Our options quickly raced though our heads.

We struggled for a third option, maybe involving a helicopter or a sympathetic cable car operator, but that didn’t happen. There was literally no one left on the mountain but us.

We chose option number two and figured we’d be able to make it down by the time it got too late.  We’d just take a late train to Munich and sleep late the next day (something we could easily do those pre-kid days). We started walking.

At first it was quite nice. We actually enjoyed it. The trail zig zagged enough that it wasn’t too steep, and the weather was still nice enough that we weren’t too cold in shorts and t-shirts. That was the first hour. 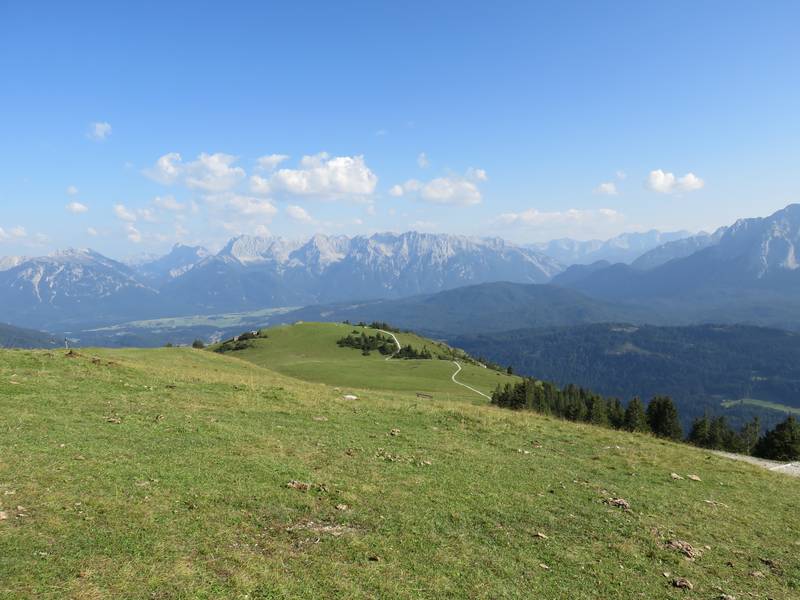 The trail just kept going and going and going. And looking at the town below, it didn’t seem like we were making much progress. It was still a cluster of red roofs nestled in the valley way down below us. There were so many trails that weren’t marked – how did hikers know which one to take? Which one should we follow? We clearly weren’t taking the right ones. 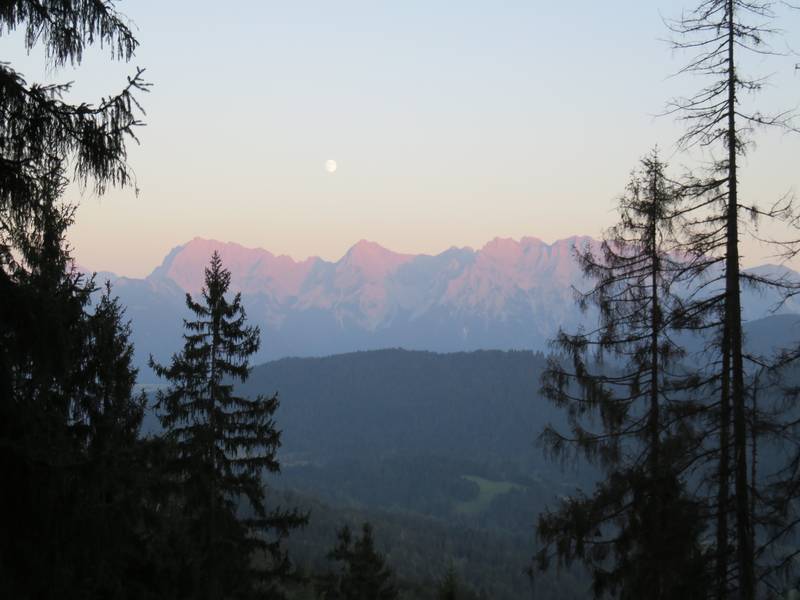 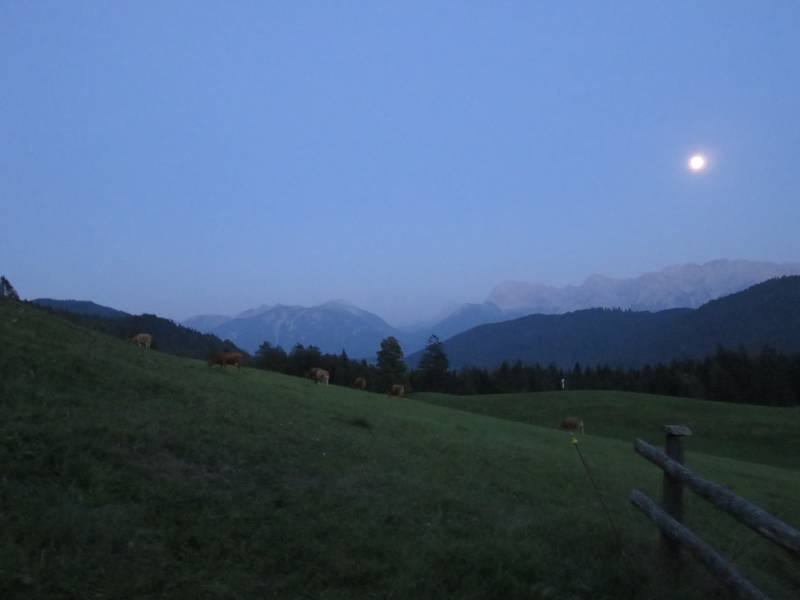 After a couple more hours it was dark, and we hadn’t even reached the middle station. An hour later, it was very dark, very cold and we were having trouble even walking on the rocky path. I had never before walked down a mountain in the pitch black – it’s a pretty scary thing to do. We could barely see our hands in front of our faces. At that moment, if we’d had sleeping bags, we certainly would have taken our chances camping out right on the trail. We were so cold, tired and hungry — the strudel was hours ago. It would have been easy enough to blame the cows, but I suppose it was our fault for not checking the time. Unfortunately, we didn’t meet a cool mountain man like Maja did in the story so we had to keep walking.

Those last couple hours we moved slowly, and by the time we made it down to the bottom, it was very late. But we made it…. to the bottom of the mountain. Of course the bus was gone, as were the cabs that were there earlier in the day. We had no cell phone and no way to get to town except by walking. It was still a few miles into town. An hour or so later we started reaching houses, even a few pensions. But at that hour, there was no way we could start just ringing bells asking about a room.

Finally we made it to the train station in Garmisch. We were so happy to see it in the distance! We would relax on the train and get home to our cozy and warm apartment. At least that’s what we thought until we saw that the train station was closed. There would be no trains until the morning.

At that point, Matt made a suggestion – there was an extra wide phone booth next to the train station and he made his case for a good five minutes that we should just curl up and sleep in the phone booth until sunrise. To this day I think about his suggestion when I see a phone booth.

Finally, we found a hotel in town that had overnight reception (not always an easy thing to find in small towns), had a room available, and took Visa. On our budget at that time, spending $150 on a few hours of sleep was unthinkable, but there was no way I was sleeping in a phone booth.

We fell asleep pretty quickly that night, but not before coming to the realization that it was an evening we’d never forget, and that someday we’d tell our children all about it.

Last week we told the story to our girls on the top of the mountain, just before recreating that fateful hike, this time a bit better dressed, earlier in the day, and with a cell phone. It was a wonderful experience.

When we were done telling the story, my youngest simply asked: “What’s a phone booth?” 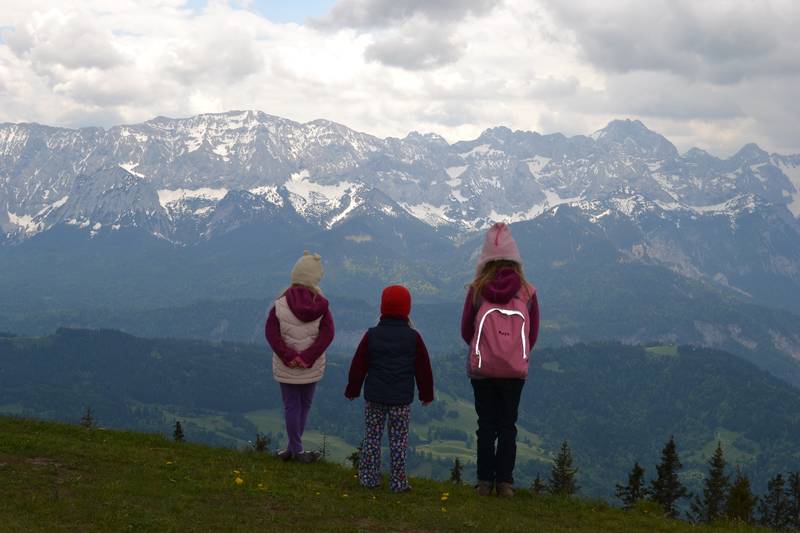