A school without walls 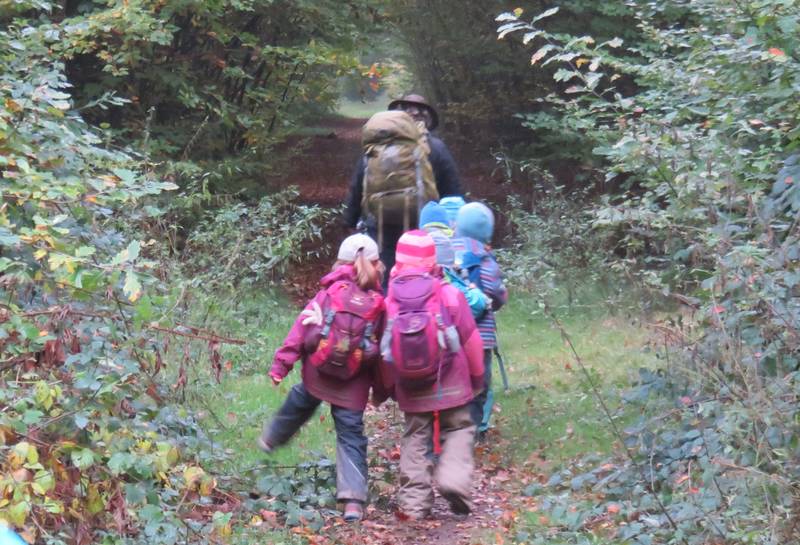 Whether we’re reading about the Queen of Denmark, roaming around a 1000-year old castle or realizing that afternoon siestas are really good for the soul — we’re all about discovering and learning this year.

We’d also like to learn about how kids in Europe are learning, so we’ve decided to be visit some schools throughout Europe over the next eight months. This past week, we were thrilled to have had the opportunity to visit a wonderfully unique school — a forest kindergarten in Germany. Ever since the idea to teach kids outside migrated down from Denmark 20 years ago, more than 1000 of these schools have popped up around Germany – most of them kindergartens but some elementary schools as well. These schools are based on the well researched notion that young kids benefit from being free to explore their world without the boundaries of having to sit in a classroom all day. 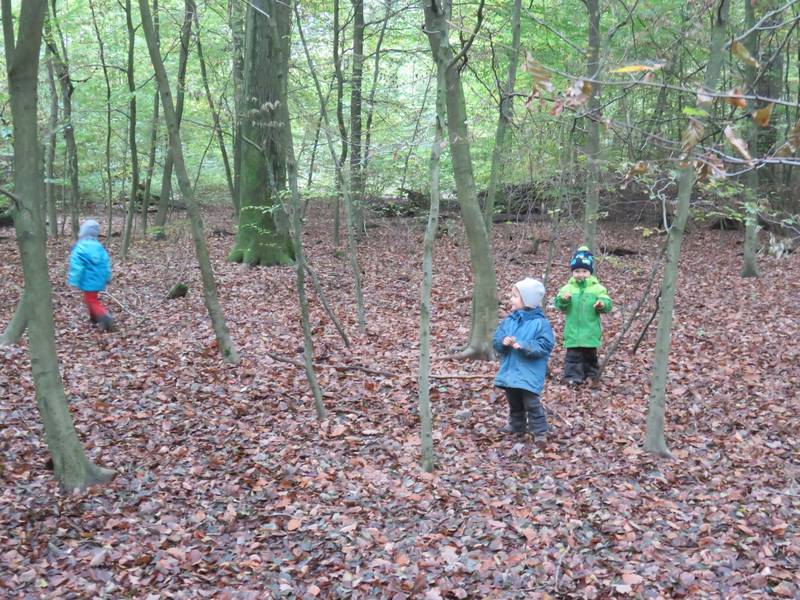 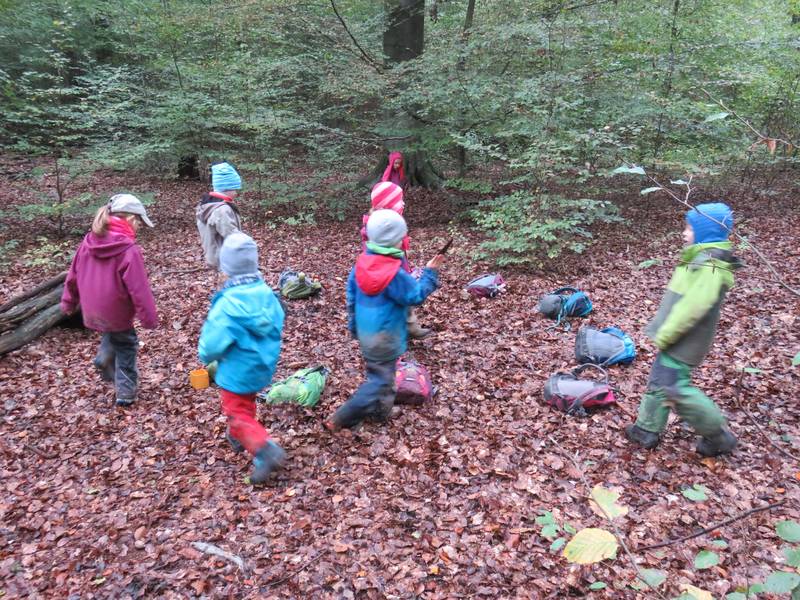 The Bad Hamburger Waldkindergarten near Frankfurt has 22 students ages 3 to 6. In Germany this is called a kindergarten but is equivalent to a preschool/kindergarten combo in America. Kindergarten is voluntary in Germany until age five, when one year of schooling before first grade is required. While not mandatory before that point, almost all Germans send their kids to school starting at age three or four. Homeschooling is illegal.

The school’s director gladly accepted our request to visit and observe for the day. We met at the edge of the woods and the kids started trickling in over the next 20 minutes.

Like at many other kindergartens the day started with circle time. Songs were sung about the new day, the sunshine and about St. Martin’s Day, which is coming up next week. The kids sang about lighting their St. Martin’s Day lanterns, a fun event that every German child looks forward to each year.

Then we all hiked deeper into the woods and arrived in a clearing in the forest. The playground equipment was a pile of logs, an enormous root, many trees and their imaginations. Everyone placed their backpacks in a circle and scattered into the woods. 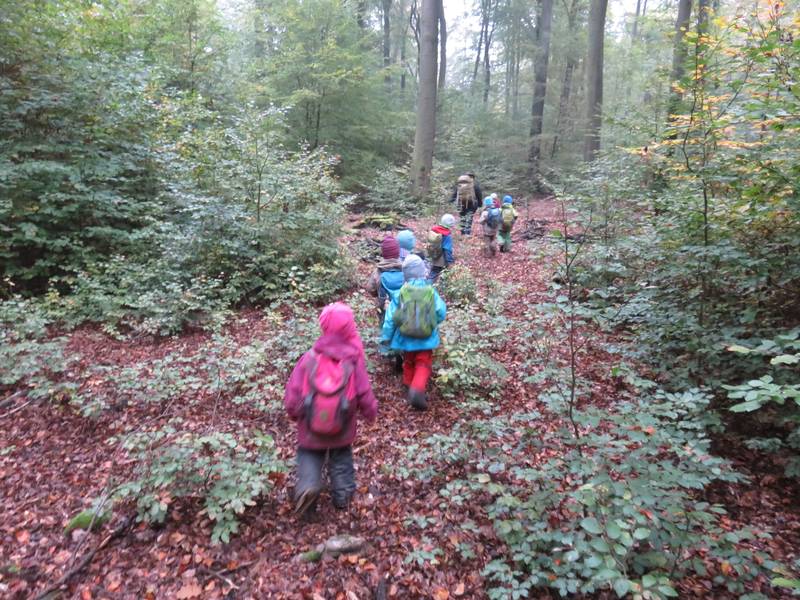 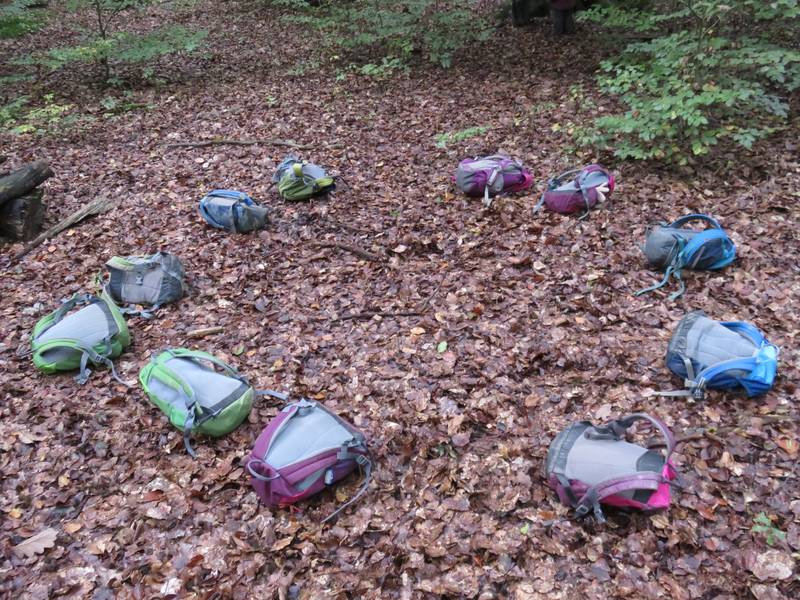 There are about 20 places in the Hardtwald forest where the school brings the children. They never go back to the same place twice in one week for the sake of the forest, as the kids inevitably disturb the moss, the bark and the branches as they play. Each place is given time to “heal” between visits.

Kids have free play until breakfast at 10. And when I say free play, I mean it. Kids were climbing, running, jumping, pretending and exploring. There were no toys, no instructions and no set boundaries for where kids could go. I watched as a group of boys and girls spent about 30 minutes on a pile of logs. They gave me a long explanation of how they were on a ship, but then one of the boys became a conductor and it turned into a train. They explored the world with that train. Some other kids were in a tree. A three-year old boy was carrying a stick larger than he was. I’m pretty sure it was to impress the adorable three-year-old girl next to him.

The kids were obviously in their element — every single one of them. Some would wander off on their own, then flow seamlessly back into the group. 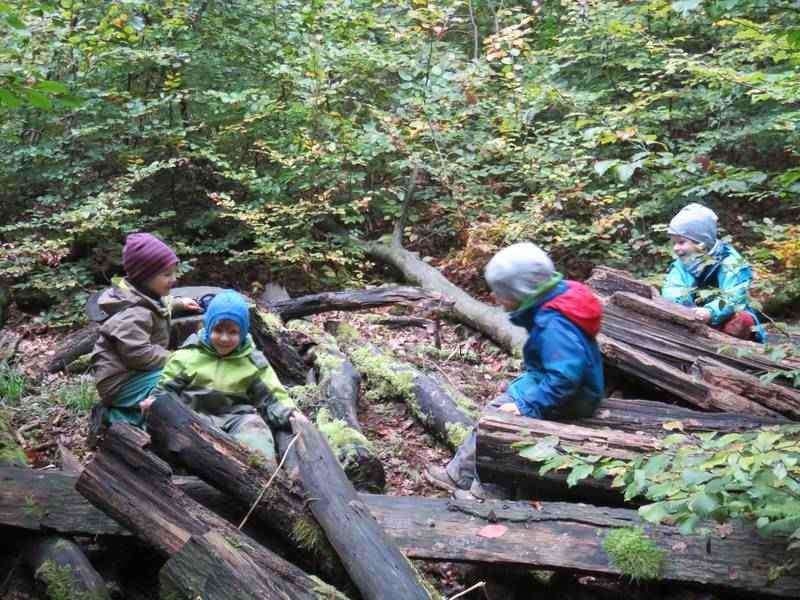 The first question on most people’s minds is how they handle safety. Like I said, there were no boundaries, no trees that were off limits, and the teachers were certainly not hovering or hopping from place to place to check on the kids.  There were only about a dozen kids that day, but normally two adults are supervising 22 very young children in an expansive forest where kids could just wander off and get lost or hurt.

This is where the group dynamic comes into play. The teachers explained that in a traditional kindergarten where kids sit at tables with different play stations set up around the room, the teacher is the focus of the class — the magnet that holds the group together and watches over it. In a forest school, the group itself is the focus. In the woods the kids watch each other, help each other, play and learn with each other — not just next to each other. They’re not directed towards different corners of a room where they can choose from blocks or legos or dolls or books. They communicate with each other in a much deeper way, and they act as a cohesive unit — a team. If a child ever wanders off, another child will notice and bring him back. If a child is too high in a tree, other kids will warn her. The teacher is always there if help is needed, but the kids’ first reaction is to help each other. What a beautiful thing it was to observe!

In the forest, kids also quickly learn the rules of nature as well as their own physical limitations. They know what they can climb and what they can’t, and that drives their decision making. The general rule is that ‘if you can’t get down, don’t get up.’ Kids also know that running with sharp sticks is a bad idea, and they know they should take off their gloves when climbing a tree for better gripping. They know they should watch their step when running and not to wander too far away from the group. When these rules are broken, the group notices. 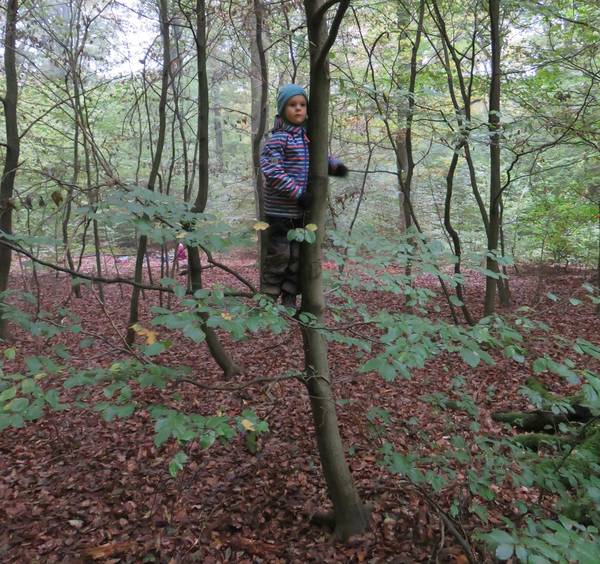 They also explained that kids in general are much happier in the woods than sitting in class, and problems tend not to exhibit themselves.

“The woods were my Ritalin. Nature calmed me, focused me, and yet excited my senses.”

― Richard Louv, Last Child in the Woods: Saving Our Children from Nature-Deficit Disorder

After free play, the kids gathered in a circle for breakfast. They each unrolled a thermal mat to sit on (required) and opened a little plastic container with a wet washcloth (also required) to wipe their hands. Those who forgot their wet cloth had to ask to borrow someone else’s in order to eat. There are no sweets allowed and nothing that comes in a plastic container or wrapping of any kind. Kids ate veggies and cheese and dark bread with butter. They drank from thermoses with water or hot tea. 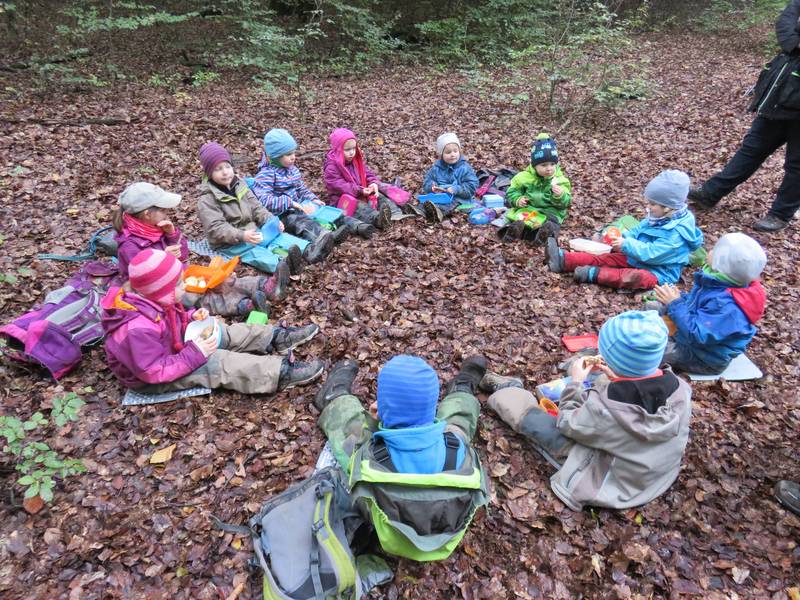 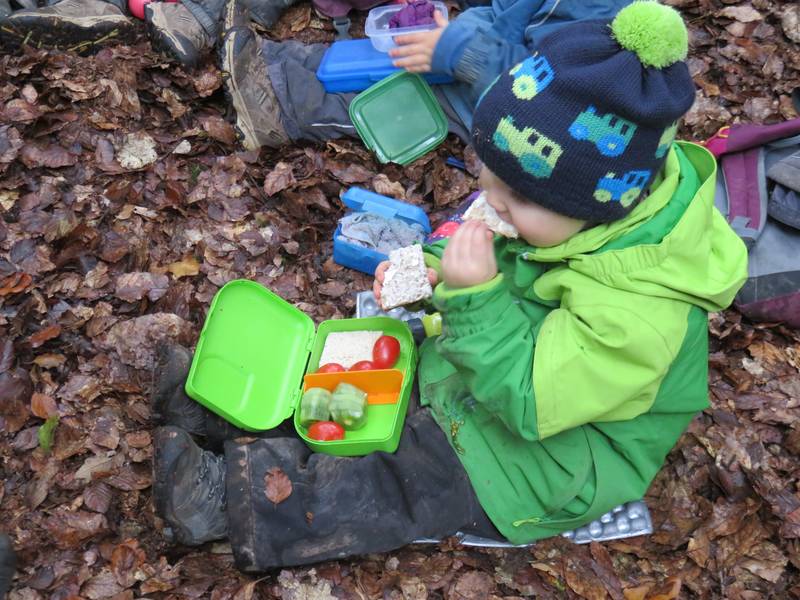 After breakfast, drawing supplies were brought out and kids sat on blankets on the leaves and drew pictures. The rest of the school day, until 1pm, was filled with more play time and some reading out loud.

The kids were happy, safe and when they go to first grade they will have learned how to play in a group, how to listen, how to be safe and how to use their imaginations. Two enthusiastic thumbs up from us. What do you think? Would you ever consider sending your child to a forest school? 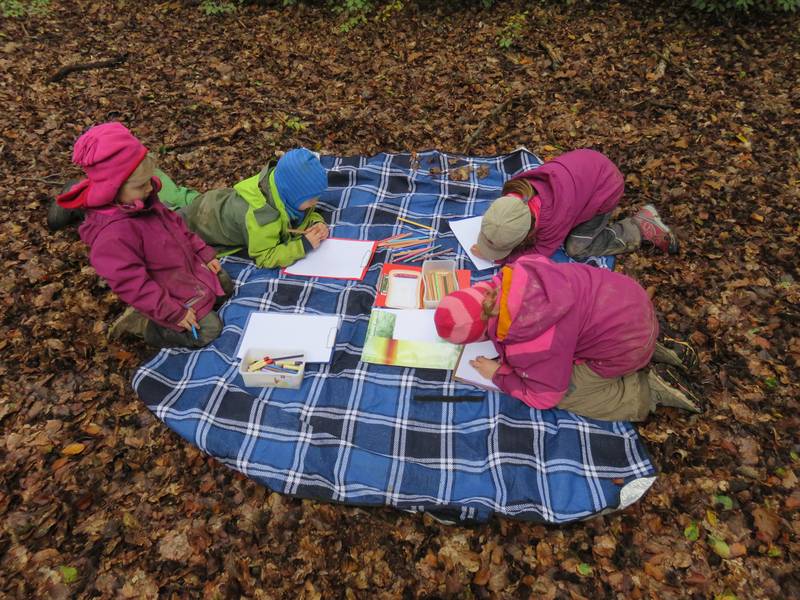 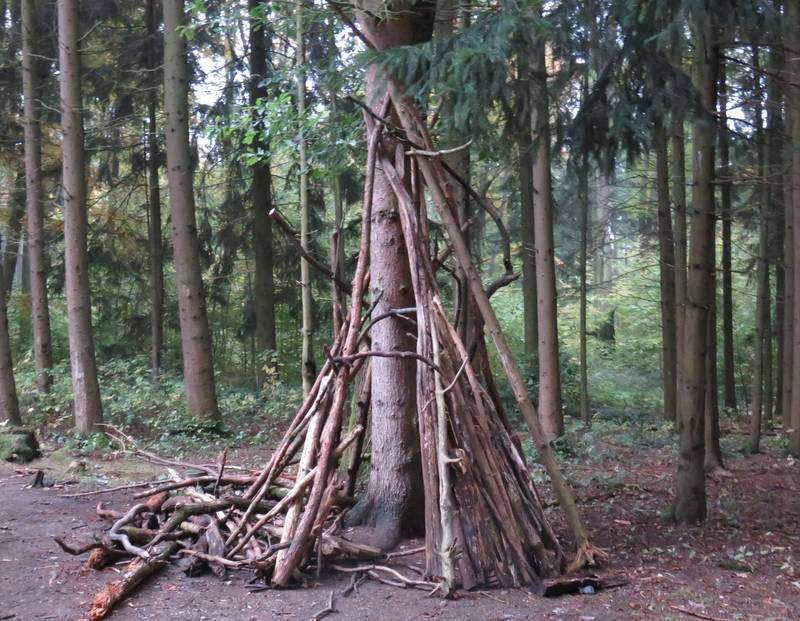 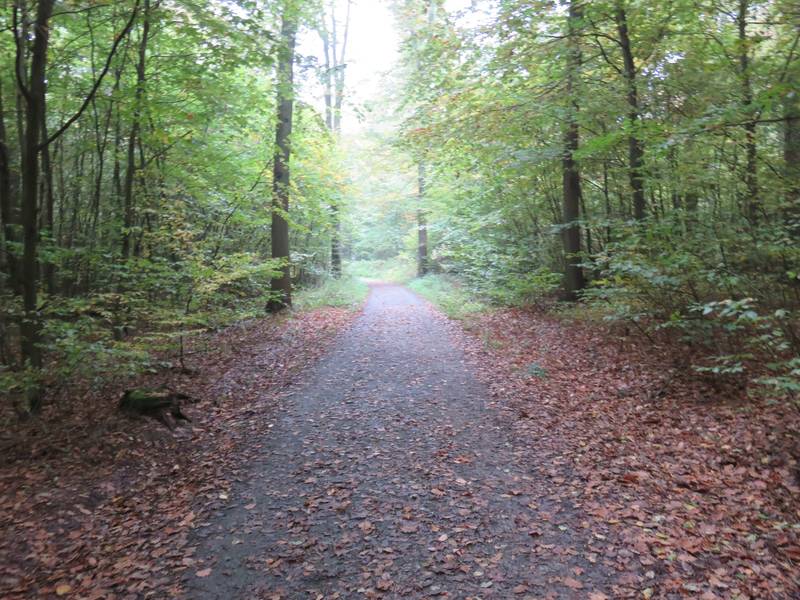