An Unexpected Mystery Day in Gibraltar 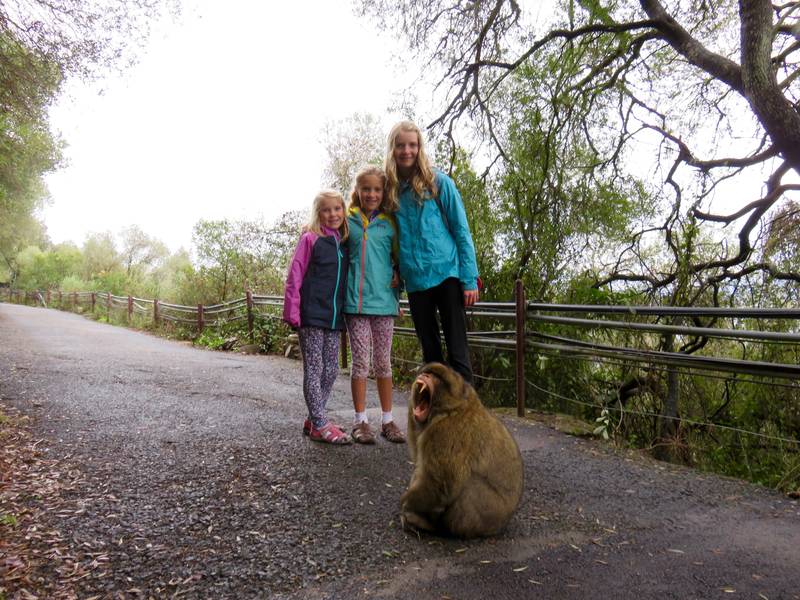 Mystery Day. It’s become a tradition in our house. I make a list of things for the kids to pack but don’t tell them where we’re going. I always add some things to the list just to throw them off track — scuba gear, rubber bands, a lime, toothpicks, or anything else silly. Immediately they start to try and figure out where we’re going.

After several months of not having mystery days – since every day really is a mystery day as we travel – I decided to plan another official mystery day outing.

I made the lists, the kids started excitedly guessing where we’d be heading, and we were off. I grabbed our passports because we’d be leaving the European Union and crossing over the border into Gibraltar — that fascinating piece of land on the southern tip of Spain that belongs to the United Kingdom. 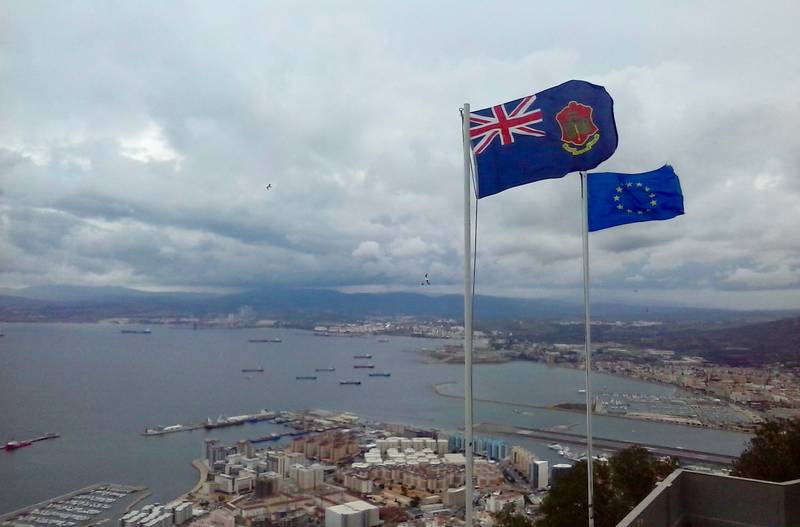 After the one-hour drive from our house in Marbella, Spain, we saw the signs for Gibraltar. Everyone was so excited – especially to see the monkeys.

These tailless Barbary macaques have been in Gibraltar for centuries, and nobody’s exactly sure how they got there. They’re the only wild monkeys in Europe and at some point came over from Africa. It’s unknown when and how, but they were most likely brought over by sailors long ago. In any case, they’re now part of the Rock. There’s even a popular belief that as long as the monkeys exist on Gibraltar, the territory will remain under British rule. This legend was taken so seriously that, when the population of monkeys fell below seven during World War II, Winston Churchill ordered that their numbers be replenished from Northern Africa.

While it was a relatively short drive, we still had to cross a border. As our car stopped at the border station, a very serious, almost angry looking guard asked for our passports, and I handed them over.  He glanced at the passport covers without opening them, he looked at the kids and then asked, “Your kids aren’t in school?” I’ve been asked that question many times these past months and have a pretty polished response for all the people we meet, but this time I really wasn’t expecting it, and it took me by surprise. After stumbling over some words about school being on the road and that we learn everywhere we go, he just rolled his eyes and waved us through.

We made our way to the cable car to go up to the Rock of Gibraltar. The kids were just bursting with excitement to see actual wild monkeys. We had visions of watching them climbing rocks and playing games while carrying little baby monkeys on their backs. 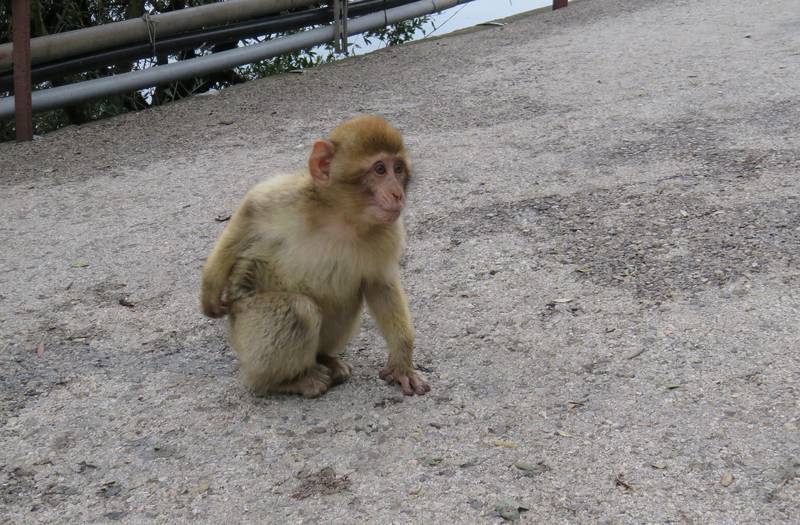 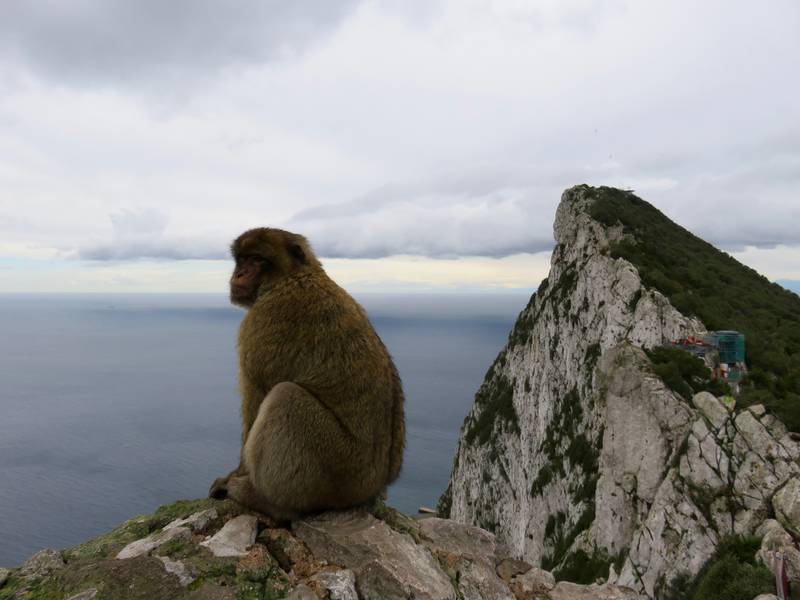 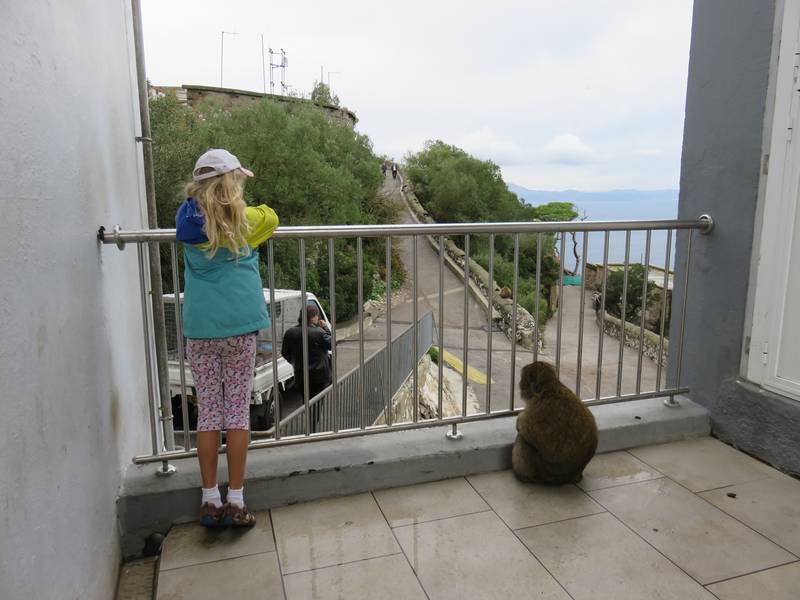 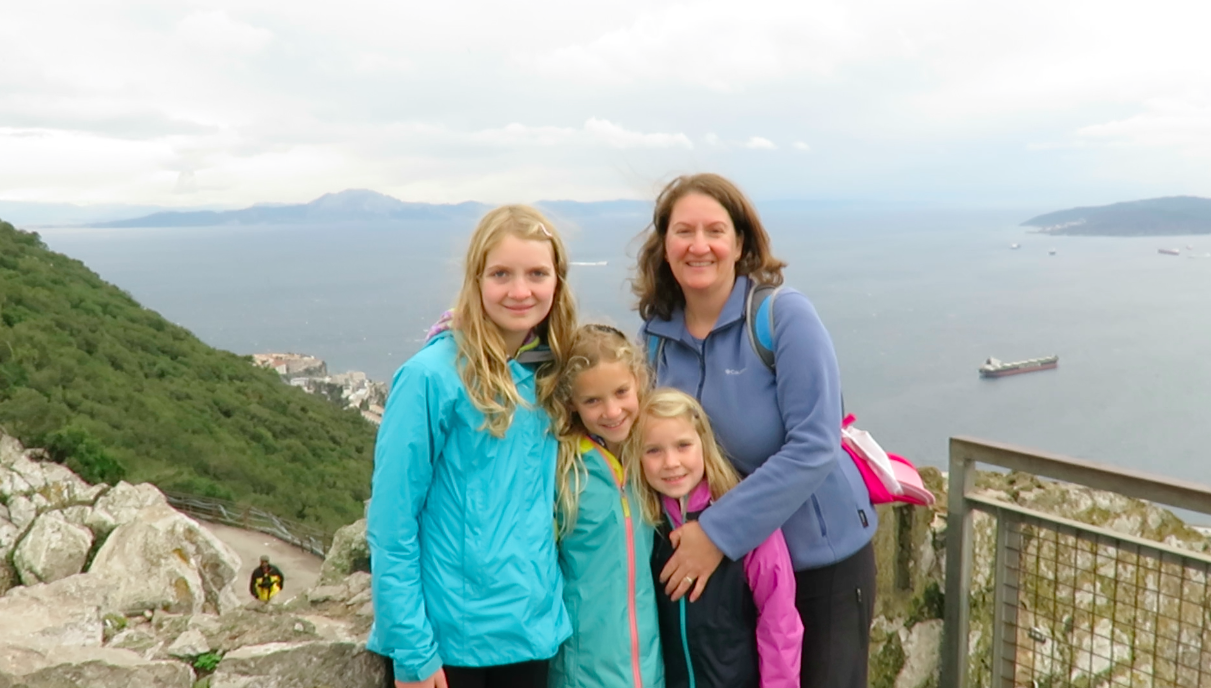 After about a minute of walking around, one of these monkeys seemingly fell from the sky and leapt onto my head. Of course I screamed (and screamed some more), but that didn’t seem to bother him in the least.

At first I didn’t even process what it was. Then it felt like he was playing with my hair, but, what I now know, is that he was messing around with the zipper on my backpack. What does one do in this situation? I certainly didn’t know. I just started running around and yelling things like, “What’s on my back??” and “Get it off me!!” Apparently everyone, including the growing crowd around me, was too busy staring at the show I was creating (and taking pictures of the crazy lady running around with a monkey on her head) to do anything. Not my finest moment.

Turns out these monkeys have an amazing sense of smell. I knew not to carry around plastic baggies because the monkeys associate them with food. I knew not to bring any food outside in my hand. I followed all the rules, but I had no idea they could smell an apple wrapped in a plastic bag inside a sweatshirt inside a backpack from up in a tree!

This monkey unzipped my backpack, ruffled through my things, took out the apple and ran off. Yes, I was mugged by a monkey. 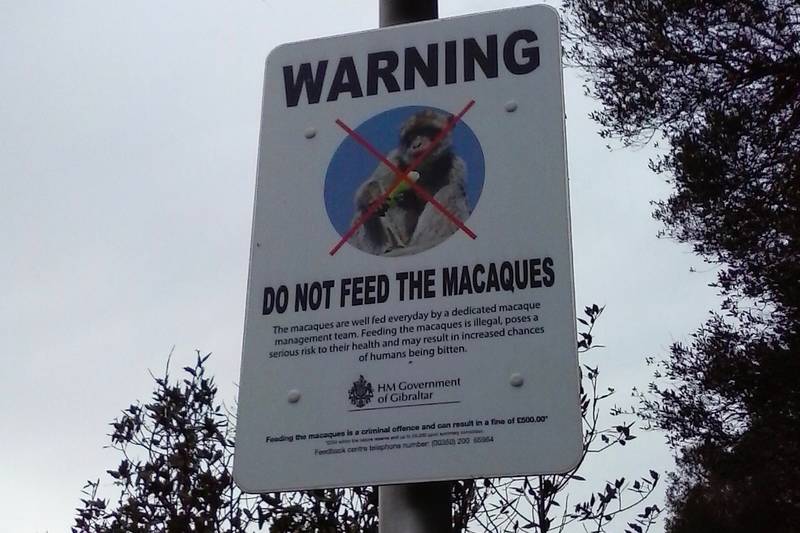 The cable car operator yelled to me to just walk away. 30 seconds later another monkey came running at me at top speed. This time I literally started running away, which was, of course, a ridiculous thing to do. He jumped on my back – thankfully not my head this time – and started pulling at the backpack to take it. Again, I responded way less cool than I should have, especially since this was my second monkey mugging of the day. My daughter somehow managed to take a picture despite my running around. 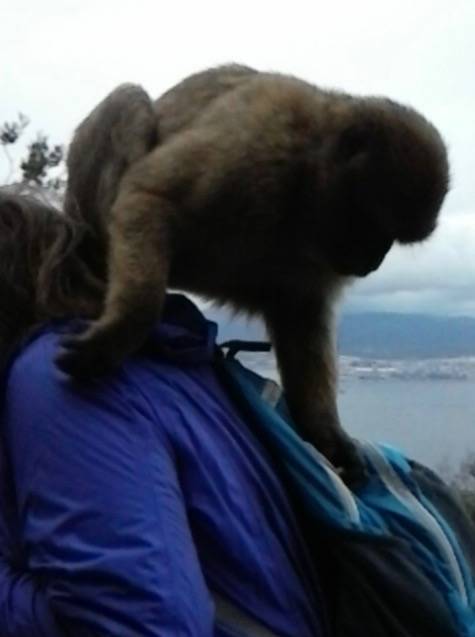 But this time, after minimal yelling, I just took off the backpack, handed it over, and he ran 30 feet away with it. He put it on his lap and calmly unzipped it as if it were his own and started pulling things out and dumping them onto the ground next to him. Suddenly I panicked realizing our passports were in there!

“Our passports, our passports are in there!” I started to yell. “He’s going to take our passports!” At that point I got my second eye roll of the day, this time from the cable car operator who knew that the monkey really wasn’t interested in stealing U.S. passports.

He left the passports and my hat but found a zucchini muffin, again wrapped up tightly. Several monkeys came over and started rummaging through my pack. One of them decided he was interested in a book I had in my backpack — Jamie Martin’s Give your Child the World, which we have now renamed Give your Primate the World. This monkey started flipping through the pages – I have never before seen a monkey literally turning pages of a book – he then took a little taste of it and decided he wasn’t interested in learning about other cultures. He left it on the ground and went back over to the muffin crumbs. 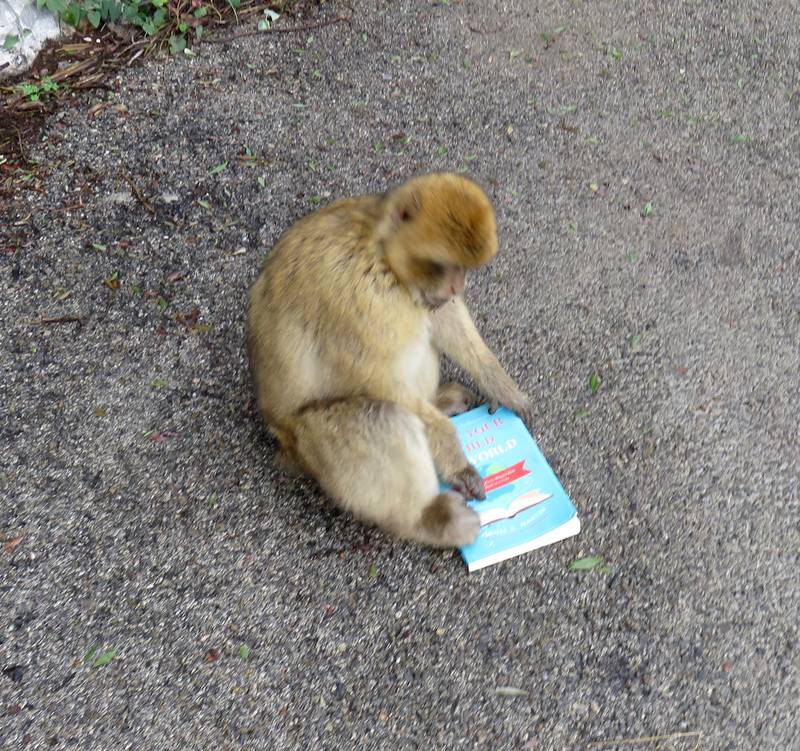 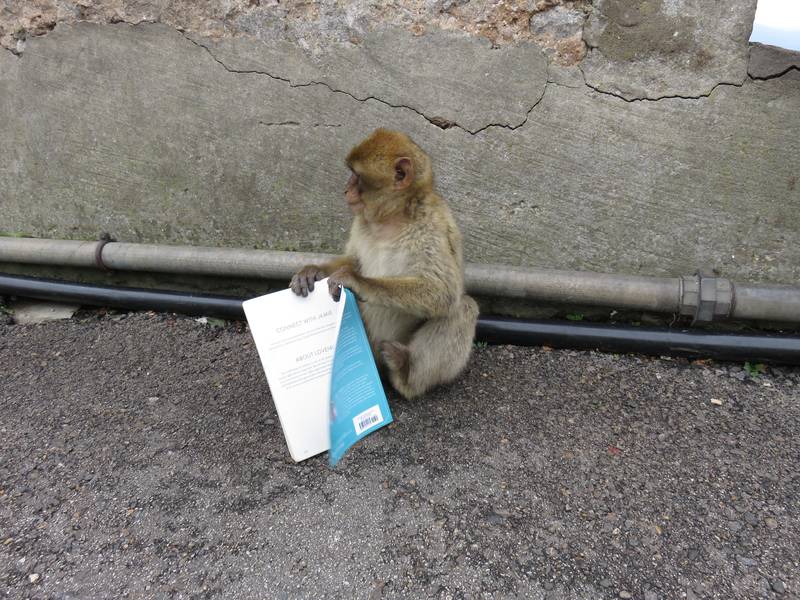 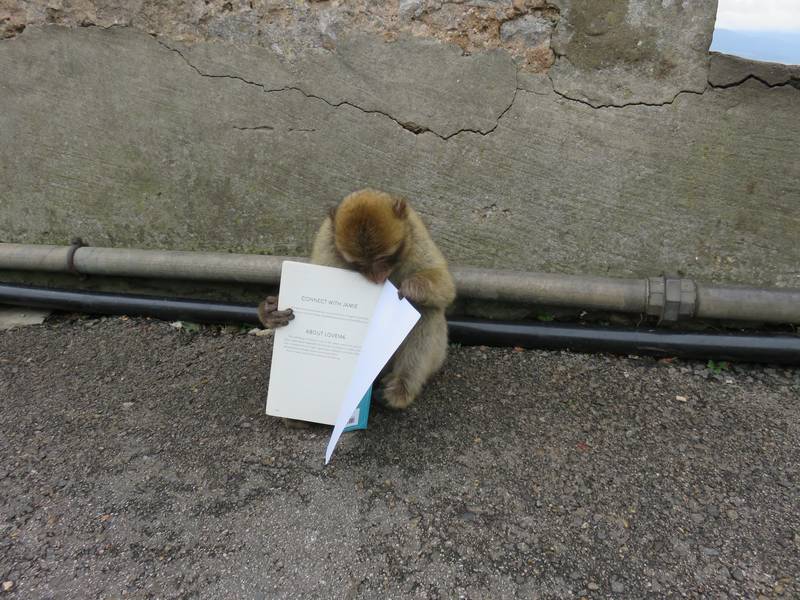 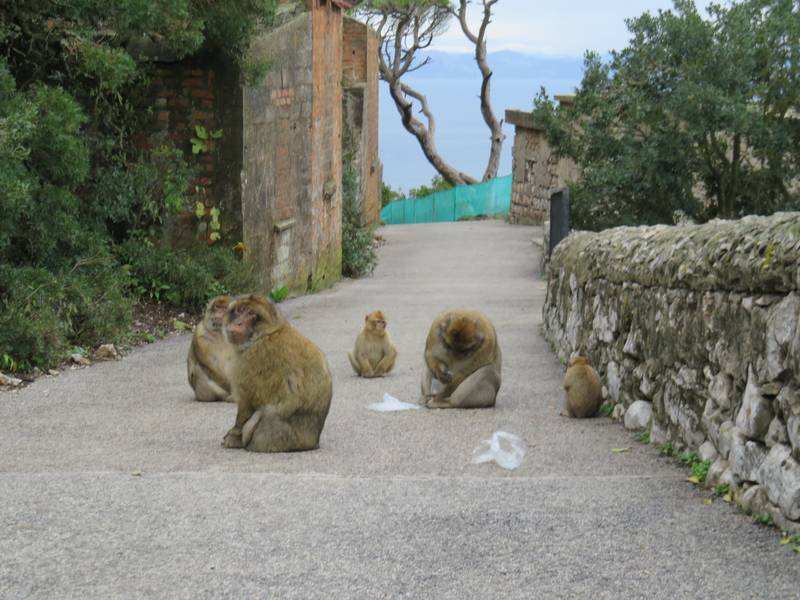 After a very eventful first five minutes, we got up the courage to pass a group of monkeys eating the crumbs on the ground, and we started heading to the caves. 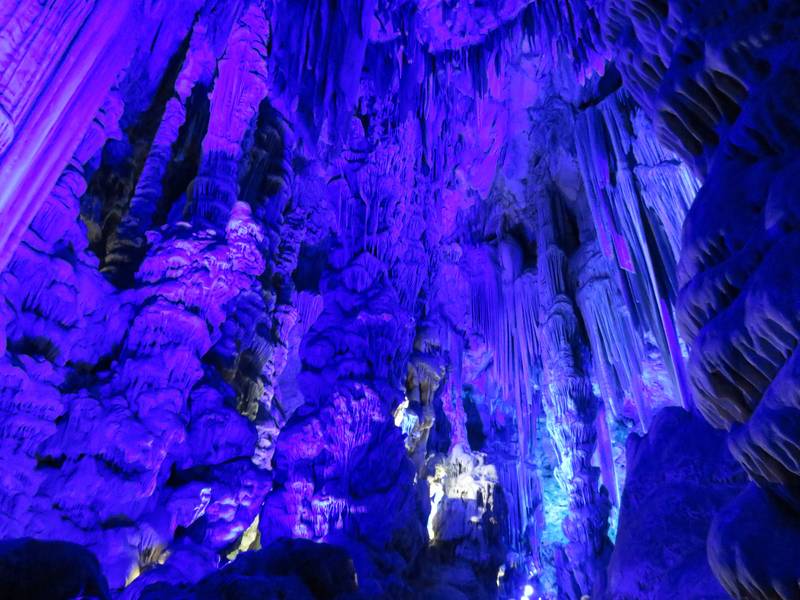 We enjoyed the absolutely stunning St. Michael’s Cave completely free of any monkey attacks and then headed back up the path. Now that I knew my backpack was completely food-free, I was able to enjoy the walk back watching the monkeys along the way.

The cable car down and drive back into Spain were filled with dramatic and increasingly exaggerated recreations of my reaction to having the monkey on my back. You got to love when the person who planned the mystery day had no idea what was going to happen. We’ll see where the next one takes us. 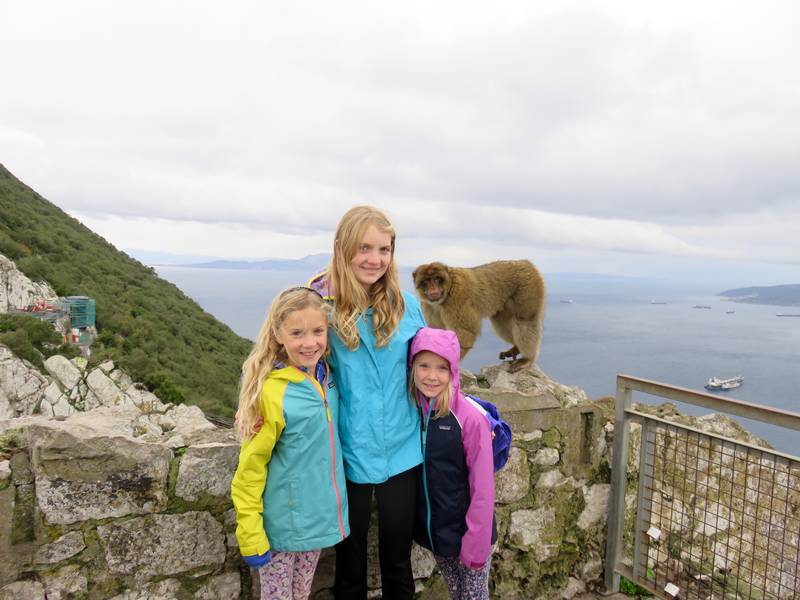