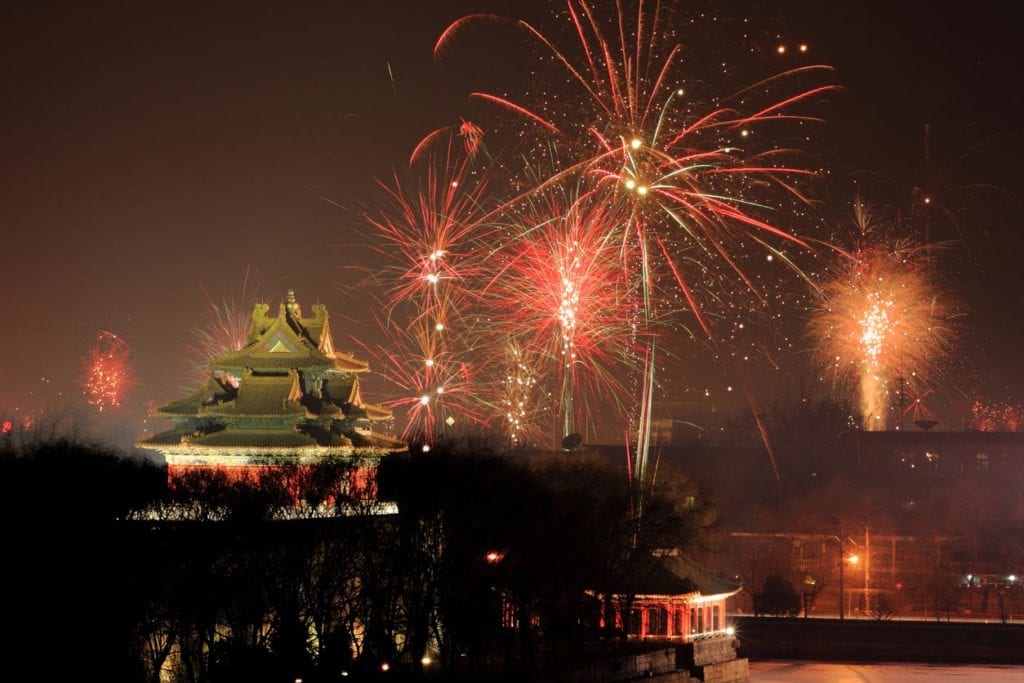 Chinese New Year falls on January 25th this year. There will be family reunions, elaborate dinners, red clothes, fireworks, dragon dances, and the chance at finding a coin inside your dumpling!  There’s so much to love about this special holiday, and with kids, there are endless ways to enjoy it. We’ve put together some easy and fun ways to celebrate while sparking your child’s interest in one of the most fascinating and important cultures in the world.

For any child who hasn’t heard of Chinese New Year — their first question will be pretty obvious — why is it celebrated later? Talking about the lunar calendar and the important attachments Chinese people place on the meaning of the zodiac animals is a great way to start the conversation. 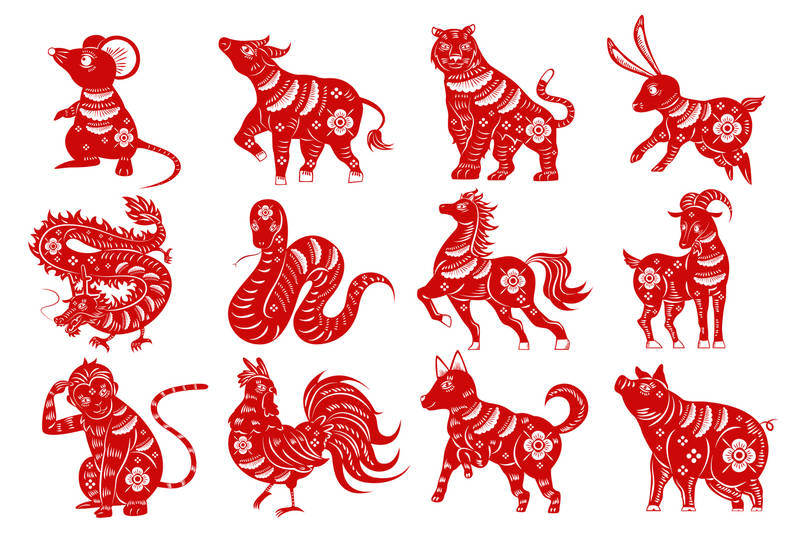 According to the Chinese calendar, each year is represented by one of 12 animals, and the animal that a person is born under influences their personality.

People lucky enough to be born in the year of the rat (2008, 1996, 1984, 1972, 1960) are said to be quick-witted and resourceful. Those are certainly not bad attributes. Consider starting things off on January 24th (New Year’s Eve) with a rat-themed matinee showing of Ratatouille or The Tale of Despereaux or Stuart Little.

While it makes for a fun guessing game, the Chinese take the zodiac very seriously. They plan pregnancies, career moves, marriage proposals, almost all life changing events on the meaning of the zodiac. If you’re interested in learning more, check out this fascinating TED Talk on the Chinese Zodiac and its effect on more than a billion people in the world.

Luck — both good and bad — plays a huge part in what Chinese people do, eat and wear on Chinese New Year. In China, red is always a good luck color, and on New Year’s Eve it’s believed to scare away spirits of bad fortune. So around the New Year, having red all around is a must.

Don’t worry if the closets in your house aren’t quite bursting with red. You certainly don’t need to drape yourself and your kids in crimson. Get a simple red necklace, tie a red ribbon around your wrist or recycle those Christmas socks (nevermind the reindeer). Just represent, that’s all! 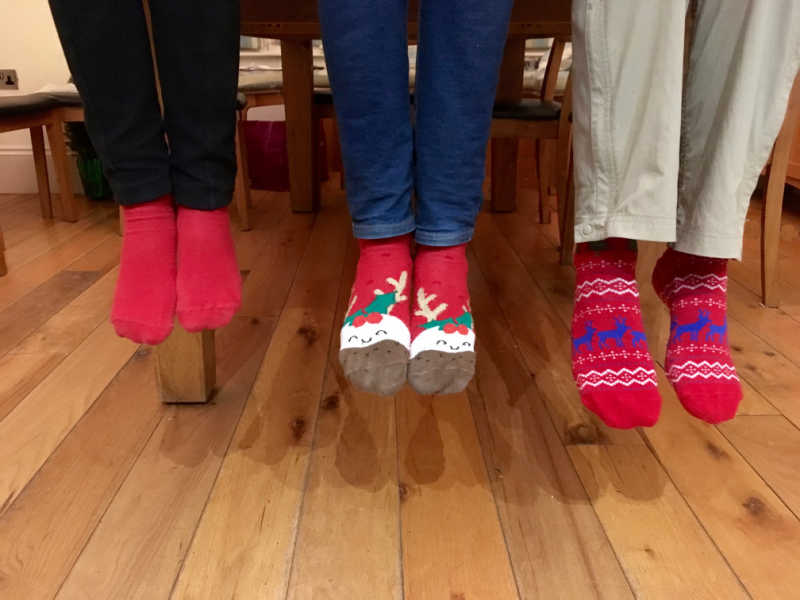 A common custom in China is to buy new red underwear just to wear on New Year’s Eve. Otherwise, just stay colorful and fun. Whatever you do, avoid wearing white and black. They’re considered bad luck colors in China and would never be worn for the New Year.

A tradition in Chinese homes is for parents to give children red envelopes with money inside. The amount doesn’t really matter here (well, maybe it does to them). The point is to pass along good fortune and blessings in the new year. Sometimes, the younger generation can also give red envelops to the older generation as a show of gratitude and a wish for a long healthy life.

The tradition of giving money to children goes all the way back to the story of why Chinese New Year festivities began. According to legend, there was a monster named Nian, who once a year would come out of the forest in the darkness of the new moon and devour entire villages! Parents would give children money that night, so they would have something to bribe the monster with if necessary.

Thankfully, Nian the monster did have some weaknesses. For one, he was afraid of the color red! That’s why people decorate with red lanterns and hang red scrolls on their window and doors. To make your own lanterns with your kids, Check out these fun lantern crafts from Activity Village. Or just have fun with red streamers and balloons. 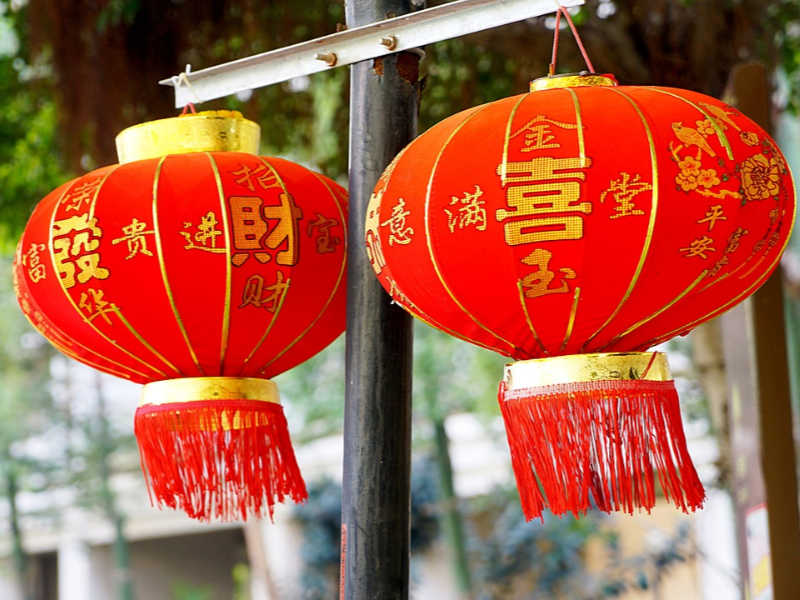 3. Clean the house and clear the spirit

In China, it’s considered bad luck to clean and dust just after the new year, as you may be sweeping away the good fortune that just came into the home. This means that cleaning must be done before the new year arrives. It’s a ritual meant for clearing the spirit and starting new. (And it’s a great excuse to have your kids clean!)

But before even touching a broom, you need to clear out the old to make room for the new. Start the new year fresh, with open minds and clear spaces to welcome all the wonderful things and experiences that 2019 is sure to bring!

Start by having the kids gather old clothes, toys and anything else they don’t need to bring to Goodwill. Throw away dead plants, broken items, ripped clothing and unloved knick knacks that have cluttered your home and your spirit long enough! After that, give everything a thorough spring cleaning.

One thing to remember, garbage should never be taken out the front door as this may keep good luck from coming in during the new year. Take that trash out the back!

It’s easy enough to order Chinese takeout for dinner on New Year’s Eve, but this year try taking it a step further. It’s tradition in many Chinese families to make dumplings on New Year’s Eve. These crescent shaped dough pockets can be filled with almost anything you want — sweet or savory. Our favorite is sweet potato. Click here for the recipe we love.

Chinese dumplings are easy and fun to make with kids because they involve a lot of fun handwork — rolling, flattening, folding. Put on some music and get a real assembly line going! 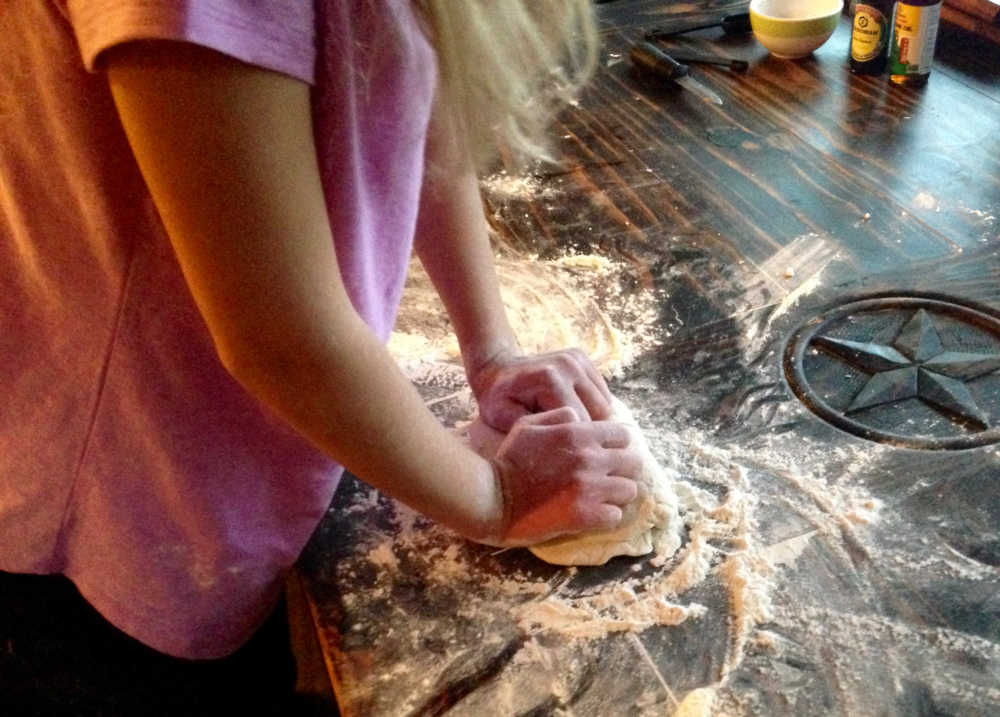 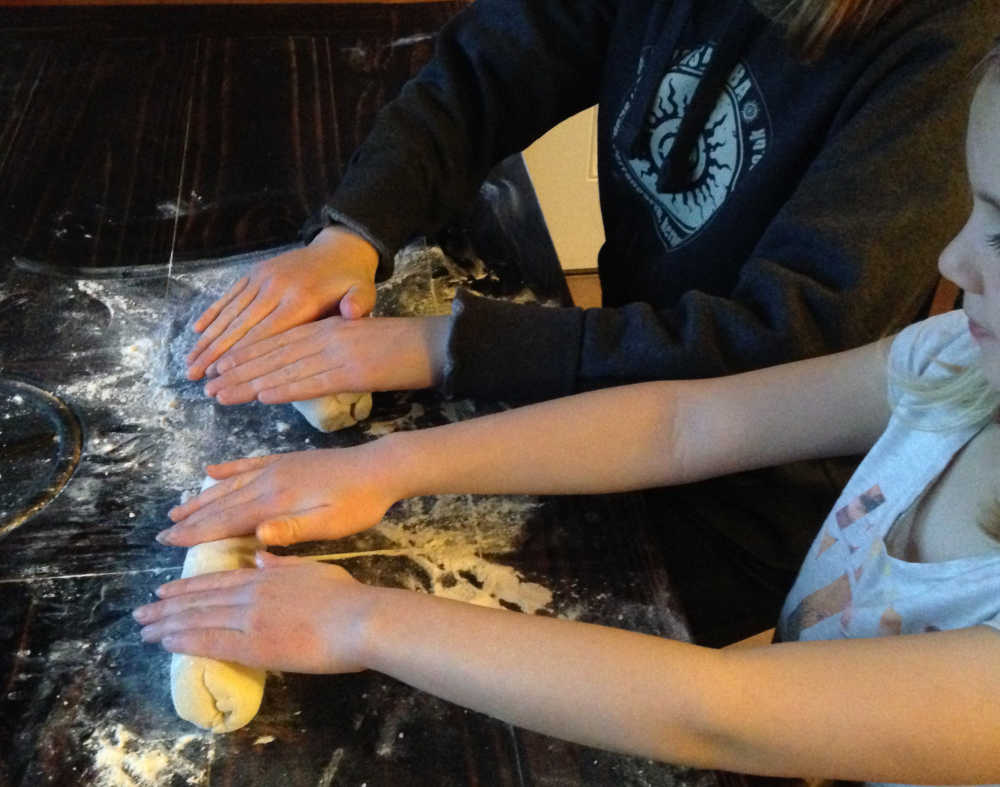 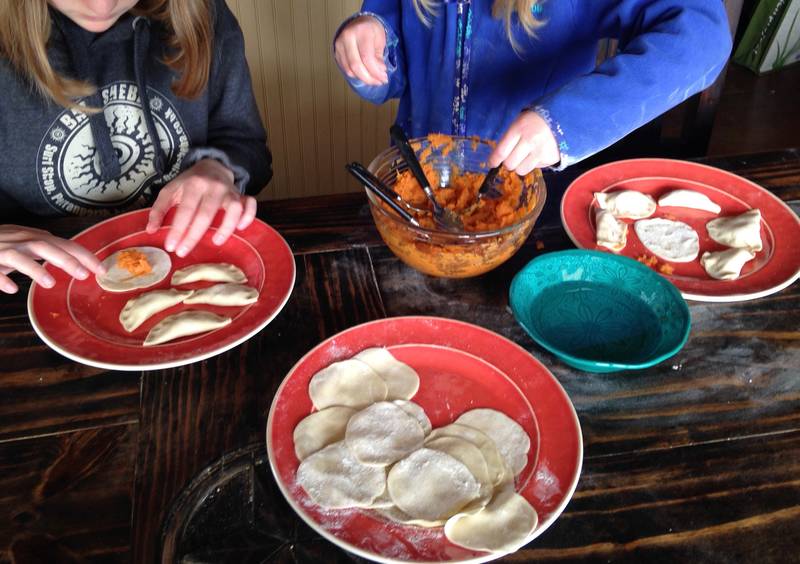 The half-moon shape of the dumplings isn’t just coincidental. The shape is similar to the shape of ancient gold or silver Chinese coins, and as such they symbolize wealth. It’s why Chinese families make them on New Year’s Eve — as a wish for wealth in the new year. Sometimes, Chinese parents even hide a coin in one of the dumplings. Just be sure to remind everyone to use their forks instead of popping them into their mouths! 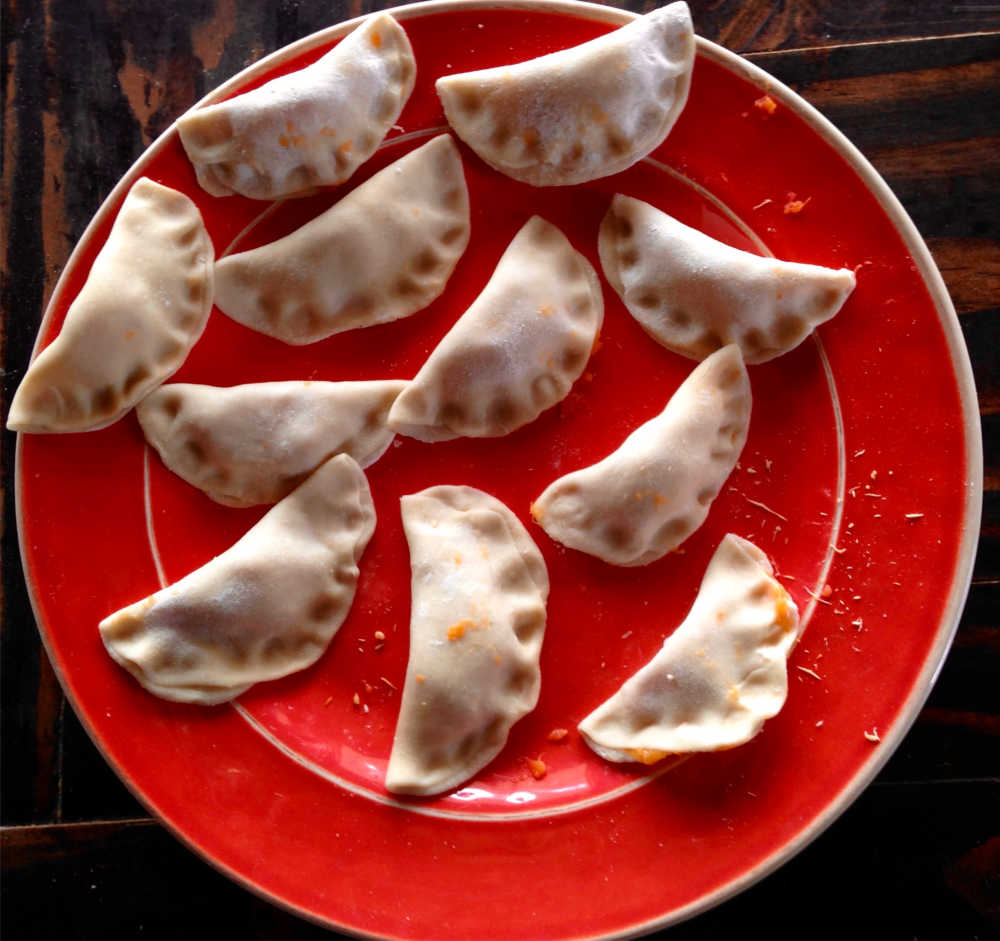 Dragon dances are performed all around the world during the Spring Festival (the first 15 days of the new year) and are meant to bring good fortune. Sometimes, instead of dragons, the performers are dressed in lions suits, but the meaning is the same. The dragon is long and controlled by multiple people, who hold up the colorful creature on sticks and snake it around in acrobatic style. The lion is smaller, worn usually by two people (two being a lucky number) and is more playful than mystical. Luckily, you don’t have to be in China to see one of these amazing dances, or even in a big city. Many Chinese restaurants all around the world will host a dance during the Spring Festival.

The New Year dragon dance even inspired our first story about China — The Patchwork Dragon. Young Jia visits her grandparents’ small village to celebrate a traditional New Year with family. But when the town’s dragon accidentally gets destroyed, Jia has to use her creativity to figure out how to replace the dragon in time for the town’s annual dance. It’s such a fun story to share with kids! 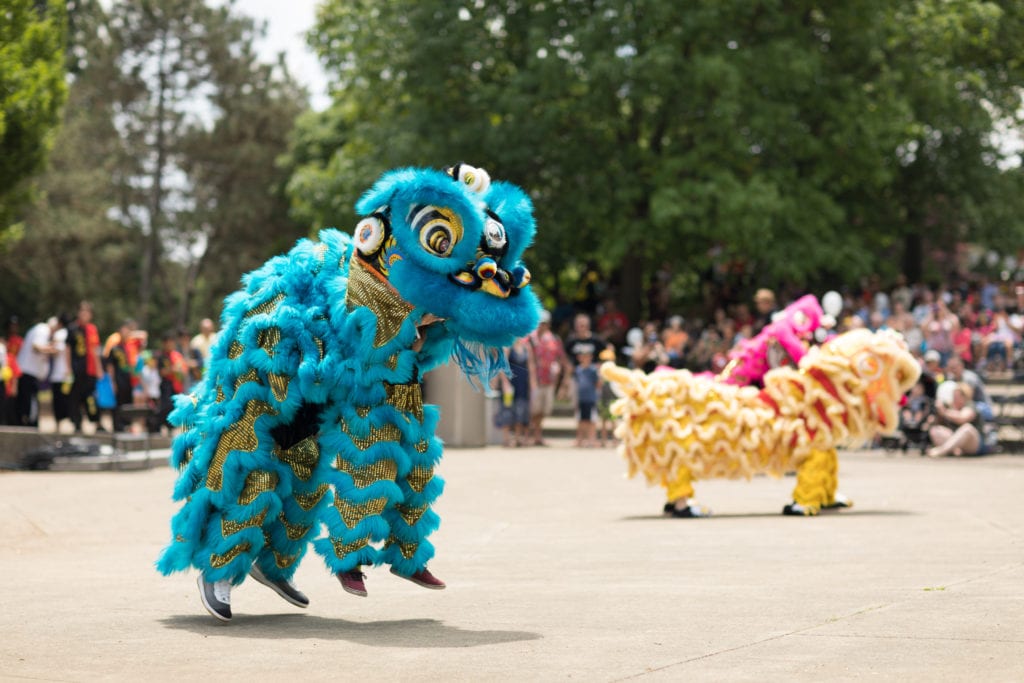 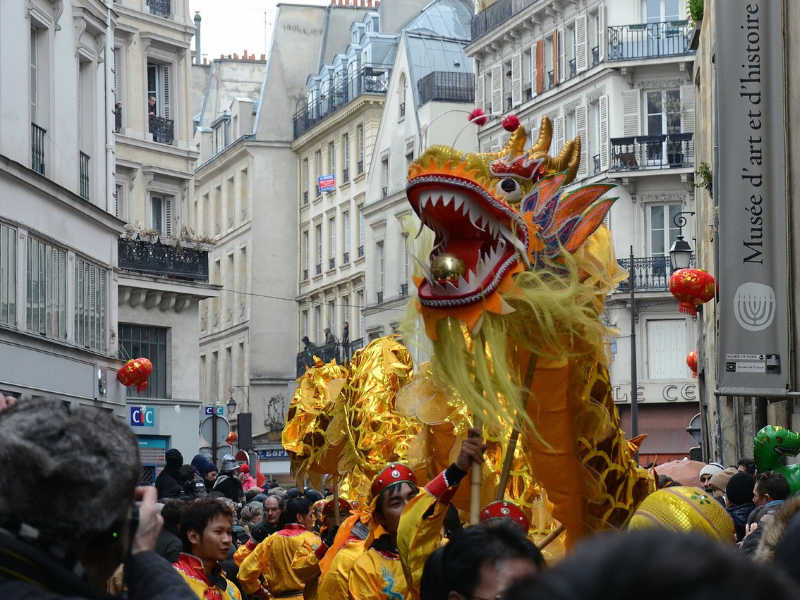 Firework displays in Hong Kong and Beijing are massive each year. But many Chinese families, especially families with young children, celebrate on New Year’s Eve with sparklers and firecrackers. The noise and bright lights are meant to ward off evil spirits who bring with them bad fortune. Banging pots and pans with wooden spoons do a fine job as well. 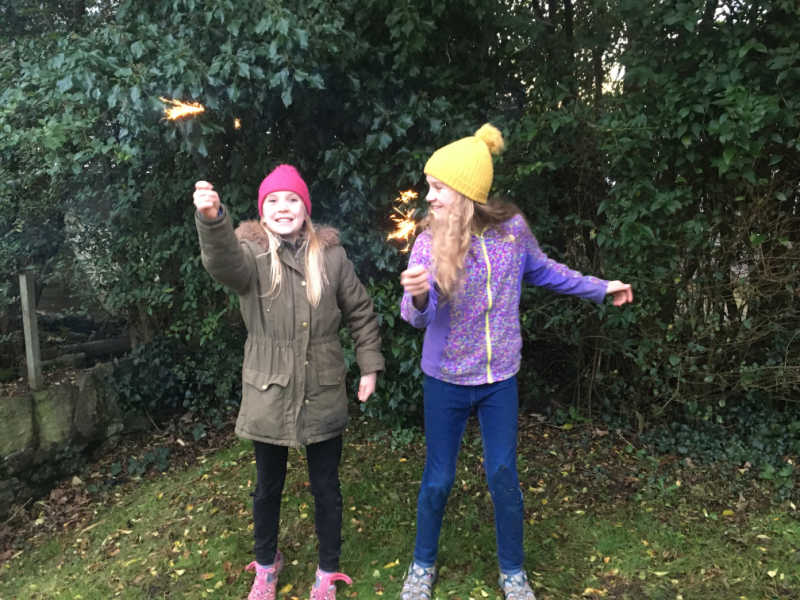 Chinese New Year is full of reasons to celebrate. We hope your family gets to enjoy some of its beautiful and ancient traditions. To get your family ready for the day, remember to listen to The Patchwork Dragon and our other stories about China!

Will you celebrate it this year? We’d love to hear all about it! 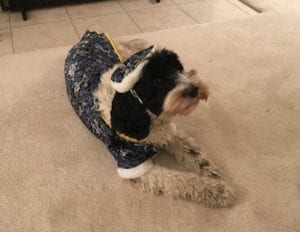